Terry Wogan and the end of a broadcasting era 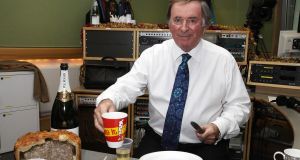 Among the many stories written about Terry Wogan after his death last weekend, one popular vignette seemed particularly telling.

When the UK radio ratings confirmed Wogan’s BBC Radio 2 breakfast show had a listenership of some eight million loyal fans in 2005, Wogan quipped: “Hang on, there are 60 million people in the country – what are the other 52 million listening to?”

Joking aside, consider the size of that radio audience – nearly twice the population of Ireland tuning in every morning.

Between his radio and TV work over such a long period, Wogan attained a rare cultural status, an avuncular presence to the entire nation.

However, there is every chance we will not see his like again for a long, long time, if ever.

The changing media landscape means it will be extremely difficult for anybody to follow in his footsteps.

In radio alone, there are now far more stations, targeting more specific listenerships, than in the era when Wogan or Gay Byrne were making their mark.

But it is the internet that has most dramatically changed our media consumption patterns – rather than a handful of TV and radio stations broadcasting live, we now have an effectively infinite amount of content to access at our convenience.

From podcasts to Netflix, from streaming music to homemade YouTube stars, our attention is spread far and wide, diluting the collective audience.

This “atomisation of our attention” makes it unlikely any one broadcaster will attain the sort of status that Wogan managed.

There will continue to be prominent broadcasting personalities, of course, with millions of fans and successful shows that pull in loyal audiences, but that sense of cultural hegemony that once existed is probably lost forever.

That atomisation is not in itself a bad thing, of course, but it likely renders the achievement of Wogan and his few peers a thing of the past.

There’s a reason his moving final breakfast radio show, from 2009, was replayed and quoted so often this week – it captured not just Wogan’s rare gifts, but also the rare bond that we can form with broadcasters, the sense of shared community and friendship.

“You’ve allowed me to share your lives with you. When you tell me how important I’ve been in your lives, it’s very moving.

“You’ve been every bit as important in mine . . . Thank you for being my friend,” Wogan said, his voice cracking ever so slightly.

From this vantage point, perhaps that perfect goodbye represented more than just Wogan’s farewell to his listeners, but the end of an era we will never see again.

Sean Moncrieff: The thing about freedom is that it isn’t free
7