Tara Flynn: I’m not going home for Christmas ... it has gone down like a stuffing seminar at a turkey convention

It’s Christmas on the The Women’s Podcast 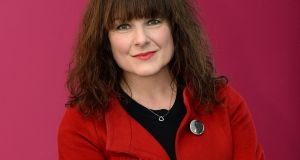 So I stayed in London again. Alone. I didn’t take up friends’ kind offers. I stood firm when faced with phone guilt. Photograph: Cyril Byrne

Oh the weather outside is…quite mild actually, for the time of the year that’s in it. You wouldn’t have to wear tights if you’d a dress on you. And the fire is so … well, the chimney’s blocked up. Landlords don’t like the idea of you making a fire – they seem to assume all tenants are accidental arsonists waiting to happen. Still, you can put your cards on the mantelpiece. Just was well. That’s all it’s good for now: holding up cards. And since we’ve no place to go…wait…this is LONDON. You have everywhere to go. The galleries! The museums! The millions and millions of friends you just haven’t met yet! The pressure!

It’s 2007 and I’m living in a flat over a pine furniture shop in Muswell Hill. If I didn’t know it was nearly the holidays, I could make a good guess by looking out my window over the Broadway at the queues and queues of people snaking into and out of the post office with envelopes and packages of all sizes. There’s a Hannukah menorah at the top of the hill. When I take the bus the 5 miles into town, chestnuts are roasting on every corner. Pop up ice-rinks fill with hipsters and for once, the heat of the Tube is not unpleasant. It has to be said – London does the festive season really, really well. Like it’s supposedly supposed to be. It’s twinkly! It’s magical! The pressure. Havefungoodwillcheerycheeryaaargh!

I am not going home this year. To Ireland, I mean. This has gone down like a stuffing seminar at a turkey convention.

“Hello, love!” There follows a fifteen minute update as to who has died or is, at best, very very shook.

When it is my turn again, I say “Listen. I’m not going to make it home again this Christmas.”

Silence. More silence. Somewhere off in the night, I swear I can hear a wolf howl, but really it is just the silence stretching out and becoming even more silencey. It’s chilling.

“You did the Christmas Away thing last year. I thought this year, we’d be going back to normal.”

There is no guilt like the guilt felt while holding a phone in England, with Ireland on the line.

It wasn’t that I didn’t want to go. My mum does Christmas the absolute best. There are decorations and a tree and even a manger in the hallway because tradition, although we all stopped going to Christmas Mass years ago. That was a miracle. Finally we could watch telly in our pyjamas, drinking in the morning, instead of being judged in our jumpers at the church (as Christmassy as that had been). And the food – well, she goes all out. The year I went back to my vegetarian ways, she even made a nut roast from scratch: we could hardly hear Willy Wonka warbling World of Pure Imagination over the sound of nuts being pulverised into submission. I had begged her to let me do my own dinner, but she was having none of it. Despite being wrestled with love into a baking tin, just above the bird, the nuts would not give in and a pile of nut-crumb landed on my plate. Actually, it was delicious, but I could see the others, pityingly, tucking in even harder to their turkey. Later, we all watch a film. “The film”, it’s called, in our house and we all watch it even if we hate it and everyone falls asleep and it’s great.

It’s just that I lived in a different country now. And it seemed to me that the acid test of how settled you were was to spend Christmas in that new place. Dashing home for comfort felt like cheating.

Besides, “dashing” – through snow or otherwise - was something that only happened in the lyrics of Jingle Bells. Flights were at least a million euro IF YOU COULD GET YOUR BUTT ON ONE AT ALL, and getting to the airport Christmas week meant boarding a Piccadilly line train around November 28th. Frightful weather whips up, cancellations happen, tent cities mushroom around Heathrow and the angry stranded bewail to Sky News that Christmas is ruined. And Rail and sail in December is only wise if Titanic is your favourite film and you fancy re-enacting it on the Irish Sea. Why risk it?

So I stayed in London again. Alone. I didn’t take up friends’ kind offers. I stood firm when faced with phone guilt.

Despite everyone’s perception of me in a candlelit garret owned by Ebeneezer Scrooge, I did all the stuff – prosecco for breakfast, great films, cooking and sleeping. I talked for hours with family on the phone, but we never got to the part where the goodwill ran out and we rehashed the leftover fight we’d been having since the 70s. It was lovely. It was calm. Just one day, with no residue or pressure. I’ve never understood why Christmas has to be magical. This year, let’s settle for “not shite”.

Giving Out Yards by Tara Flynn is published by Hachette Ireland

Irish woman in San Francisco: Life is quiet but everyone is exercising
7

Monica Lewinsky: ‘I’m not alone any more. For that I am grateful’
8

‘I feel like I’m always new in Ireland. Every good friend has moved away’
10