Susie Orbach: 40 years on, fat is still a feminist issue

And even more so than when she wrote her seminal book in 1978, says the British psychotherapist 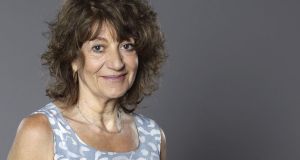 Susie Orbach: ‘The body is really not somewhere which is stable any more as an idea.’ Photograph: Getty Images

It is the morning of the London Tube strike when I set off to interview Susie Orbach, author of Fat Is a Feminist Issue. The bus queue at Waterloo is a long, slow line of quiet fury. When the bus arrives, there is an involuntary jostle and shove. A woman glares at me and says, “Watch where you’re going” and then, “And lose some weight”.

People look at us, sweating and embarrassed behind their sunglasses. I want to stomp on her foot like a toddler. A tall man beside me tries to salvage some decency from the spectacle, and pulls me away into the queue in front of him. There are times when that small hurt would linger, but if you’re on your way to speak to a prominent psychotherapist specialising in body image, you have to appreciate the irony.

Fat is a Feminist Issue was originally published in 1978. It explores the fat=bad, thin=good associations embedded in our society, and why women eat when they are not physically hungry. Many years and reprints later, its message still resonates.

While feminism is more visible than ever, fat-to-thin is still one of our great redemptive narratives, to the extent that fame-hungry celebrities deliberately build it into their own stories. We believe in the get-thin romcom montage. The sinner crawls out of the bread bin, great love comes along, ambition thrives unhampered.

When I finally sit down in Orbach’s office near Belsize Park and tell her what happened, she is horrified.

“It’s much worse now than when I wrote Fat is a Feminist Issue. It is as if everyone feels they have the right to comment. You’re surveyed and you’re found wanting. The preoccupation with the body and the fact that there are industries that make so much money out of women’s discontent, and now men’s. The diet industry, fitness industry, the cosmetic industry, these are all huge businesses. They sell an aspirational position where we have to appear in a certain way.

“If I go back to Fat is a Feminist Issue, it was a long time ago and you didn’t all have to be beautiful. It wasn’t a requirement. In my mother’s day, you had to be sexy in order to get the man. Now, you have to be sexy at six and seven and forever. There’s such an acceleration of this as a primary form of identity.”

And this in a time when we consider ourselves more media-savvy than ever. “The way culture comes into us is not just through the hoardings of media but also through the family and the teachers. Now it’s all got this cover of health on it, hasn’t it?”

Perhaps the diet industry is not as powerful as it was? We’re more wary of diet and low-fat labels; now we’re #cleaneating, #glutenfree. Orbach disagrees.

“We’re all engaged in the culture and this is what the culture offers us, and therefore we can’t help but be engaged and play in the territory. It’s quite hard to make an adaptation of ‘I’m not buying into this.’ ”

Who you are is a display

In an increasingly visual culture that refuses imperfection, is fat seen as a public display of something wrong?

Orbach was a co-originator of the Dove Campaign for Real Beauty, but agrees that even in our progress with fat activism and plus-size bloggers, we are a far cry from seeing a variety of bodies presented to us without comment. “There are so many women of different shapes, sizes and ages who risk actually daring to be in their bodies without expressing shame. At the same time, it’s at the price of the body becoming even more significant than it was.

“In order to challenge the dominant discourse, you need support, because there’s your individual pain and how do you dare to have your own body in a culture that is telling you you’re too big at the bloody bus stop? You need support for that because it’s an assault at the individual level, and your individuality is constructed in culture.” Orbach agrees feminism itself is in a healthy state. “The books are selling and that’s very interesting. We haven’t seen that for a very long time. I think the message is getting in there.”

Fat is a Feminist Issue

“I suppose what I really thought was the huge difference between when I wrote Fat is a Feminist Issue and when I wrote Bodies [in 2009]: people used to come in to therapy thinking, ‘I’m upset about my size or my eating’. Now they come in and they just accept that their bodies are troubled and there’s nothing to be done about it. They might come in because they feel bereaved or depressed, but an underlying anxiety is around their body, which is so ubiquitous they don’t even mention it.

“The body is really not somewhere which is stable any more as an idea. It’s something that has to be managed, worked on, produced. And is, essentially, trouble. We’re very used to the idea of destabilised psyches. We use words like ‘neurotic’ or ‘psychotic’ or ‘borderline’. We understand all of those things in relation to the development of the mind but we don’t actually apply them to the fact that maybe the bodies are also a bit borderline or psychotic or dissociated.”

She believes the route to a stable body to be a very ordinary one. “Being able to discern an appetite, to consider whether it’s a physical appetite and whether you can satisfy it, how you can satisfy it. I think the idea of marshalling your body and disciplining it actually doesn’t give you body stability. But learning to eat when you’re hungry and stopping when you are full, and allowing your emotional life to have its own presence and be able to feel things. Being able to move your body because it feels like it can move rather than because it’s got to pound the treadmill. “

Orbach reportedly treated Princess Diana for her well-publicised eating disorders and is a founder of the Women’s Therapy Centre in London, which celebrates its 40th anniversary next year. “We were the first therapy centre that was actually visible and was part of demystifying therapy and making it possible. Therapy has become a lot more available [but] people still feel it’s very private and very shameful. As opposed to, ‘I’m having such a good experience in therapy’. The more emotional literacy we develop in general, the lesser the divide between the private and the public. It doesn’t mean we won’t have a private life; we all need a private, beautiful, idiosyncratic personal experience. But the shame and all the stuff that hurts will lessen a little.”

Is it shame that brings people to therapy? “Shame and guilt, yes. People also come for despair. People come for when they don’t have the words.”

We seem to be understanding our minds more and our bodies less. “We’re being more compassionate, because we weren’t compassionate to our minds. But now we are. And we see our body only as an instrument to be fixed.”