Speed painting: one hour to capture a person’s essence

For Sitting, his latest exhibition, Nick Miller has undertaken a marathon as he paints five portraits per day, with just one hour for each

Nick Miller is artist-in-residence at arthouse in Stradbally, and he painted Ann Marie Hourihane for a recent series. Video: Lisa Fingleton 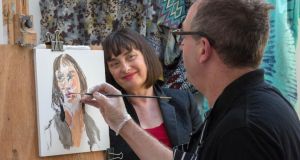 It is a bit of a privilege to watch someone painting. To see the artist Nick Miller start a portrait with two banana-like shapes in a flesh colour, and find out that this is the head; that the eyes and the forehead go in above them, the nose and mouth in between. But that is later on. Miller most commonly starts his portraits from the bottom.

After the two banana shapes, he begins his portrait of Sheelagh Coyle from her shoulders and from the pattern of her sleeveless top. Later on he starts his portrait of Bernadette Dunphy from her Converse shoes. “I like your shoes,” he says. But that is unusual, and hers is the only full-length portrait thus far. She is so delicate, sitting on a chair like a Degas; the other 14 of us are head-and-shoulder types.

Towards the end of each portrait, Miller walks to a round mirror, which is placed diagonally to the sitter. What is he checking? “It’s more to do with whether it looks like a painting,” he says. “Whether for me it has the qualities of a painting. Which is sort of strange . . . unquantifiable.”

These things are said not to the reporter but to the sitters, to reassure them and chivvy them to the finish line. “Not too long. Not too long now,” he says. He sounds like a doctor or a dentist. “Five more minutes.” He is calm and good- humoured amid the slamming doors, the sound of the ice-cream van, the heat in the studio.

“I’m sort of experimenting with what’s possible,” he says. “People these days can’t sit for hours and hours.”

In Brooklyn, New York, Miller painted 40 portraits in as many days. “I had three hours with each person. I painted a watercolour and an oil painting for each person. Stealing a New Yorker’s time is like stealing the crown jewels.”

Here we are at Laois Arthouse in Stradbally. The time has got even shorter, and the watercolour paint is going on quite thick. Miller is painting five portraits per day, not counting those of media types who barge in, and he is fulfilling the commissions for two oil portraits of local artists, the sculptor Cathy Carmen and the poet Pat Boran. In fact, as Miller speaks, Boran is drying outside.

Each watercolour is scheduled to take an hour. “It’s amazing how different each hour is,” Miller says to Coyle, a retired teacher who now writes.

Miller is working in one of the artists’ studios at the Laois Arthouse in Stradbally, which is in a converted courthouse. He is sleeping in its artists’ apartments.

The front of the building houses the library, where this afternoon small children are buzzing around on a summer project while their mothers chat. The rest of the complex has a simple wall around it. “I’m my own jailer,” he says.

He is experimenting with the process, he says. His primary interest is not in perfection, but in the encounter. It takes a confident person to be prepared to make their mistakes in public, but this experiment is more than that: it is a marathon.

The marathon has been arranged by Muireann Ní Chonaill, the arts officer of Co Laois. She knew about the Brooklyn project and had admired Miller for years. In 2008 she met him at his home in Sligo.

In 2011 she took over the management of Laois Arthouse, which opened that year. She established a link to the Irish Museum of Modern Art, which lent three of Miller’s works from the 1990s, including a beautiful portrait of his wife, Noreen, which is displayed in the tiny gallery of the Arthouse. There was also a public interview with the artist, conducted by Christina Kennedy of Imma.

The project is called Sitting, and was achieved for €18,000. “I don’t mind if you print that figure,” says Ní Chonaill. It came from the Per Cent for Art scheme – funded by the 1 per cent levy on the building of capital projects, back in the good times – and Laois County Council.

Sitting is an unusually imaginative event for one of our many beautiful and frequently deserted arts centres. The people of the midlands flocked to have their portraits painted after the opportunity was advertised in local papers.

“People were advised that there was going to be no photorealism, and that the portraits would not be a vanity project for anyone,” says Ní Chonaill. “There was a long waiting list.”

Bernadette Dunphy is 25 and has a master’s degree in musicology. She is on a JobBridge scheme in the public libraries of Sligo and Tubbercurry.

Miller and Dunphy talk about Laois and Sligo. He is worried that today she is being subjected to a lot more media attention than one person can stand. Behind him is Lisa Finnegan, a documentary maker who is recording the whole project; the photographer Dylan Vaughan, whose father, George Vaughan, is an artist known to Miller; me, writing everything down and staring; two still cameras; and one video camera.

When each portrait is complete, Miller takes a photo of it and of the sitter with his own camera. Dunphy is wearing a little pendant in the shape of a camera. “I wasn’t expecting so many people,” she says, looking out at us. “It’s just so funny, the whole thing.” She is from Ballinakill, about half an hour away.

“Put it down to experience,” says Miller. “The painting’s going all right so far. Miraculously.”

He has already done the shoes, Dunphy’s jeans, which he has made slightly greenish, and the red chair. Now he is moving on to the cream cardigan and the white vest.

“Settle where your head will be,” he says. “If you feel like you have to move, it’s okay.” The long streak of her dark hair goes in before her face, linking her shoulder, chest and cardigan with the head.

When you look at us all, in our portraits pinned up so casually by the artist outside – no fuss about installation for him – you can see that he is very good at the tilt of someone’s head. He is very good at glasses, too; he wears glasses himself. He is standing now in front of Dunphy, with eight or 10 brushes in his left hand.

You can see how intense the work is. But when you’re sitting for him you can’t see that; it feels quite leisurely. “Look the way you were looking,” he says to her. He is almost finished.

He used to go round in a van and paint from it. He painted the journalist John Waters for a television programme.

After you have had your portrait done, you feel a bit peculiar. Looking at a painting of yourself, as opposed to a photo, is strange. But it’s special in some indefinable way, as quite a lot people in Laois and surrounding counties now know.

The exhibition of portraits completed during Sitting, Nick Miller’s residency at Laois Arthouse, is in Stradbally until September 1

An Irishwoman in Milan: ‘Everything that usually seems important suddenly isn’t’
3

What sold for €320k in Inchicore, Crumlin, Phibsborough and Terenure
7

What’s the point of moving home if our kids will have to emigrate?
8