Snapchat turned my brain into self-hating mush, so I quit

It’s repetitive, shallow and tedious, and more addictive than cigarettes. I miss it 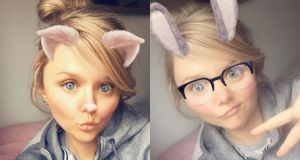 Snapchat: It was nice knowing you. YOLO!!

I felt a cold breeze on my behind and realised I had been sitting on the toilet for at least 20 minutes, tap-tap-tapping through my Snapchat feed like some kind of a social-media zombie, totally unaware of the passage of time.

I had copy to file and a wash to put on, but in those 20 minutes I wasn’t in my little Ranelagh apartment; I was sitting in Snapchat star James Kavanagh’s kitchen, cooking seabass with his partner, William; I was walking down the street with blogger Rosemary Mac Cabe; and I was laughing along with actor Kate Hudson as one of her babies played with her eyeliner as the actor got ready for a night out. It was like the opposite of flow; it was like chewing gum for the brain. It was at this moment that I knew I had to quit.

It is repetitive, shallow and tedious, but it’s more addictive than cigarettes and biscuits

The thing about Snapchat is that it is mostly incredibly inane. People upload short video clips of their day-to-day lives, which you can watch for 24 hours before they disappear. The fleeting nature of each video means there’s little to no pressure to create anything particularly meaningful.

Depending on how many clips are uploaded, and how many people you follow, you can up end watching numerous short films about nothing every day. It is repetitive, shallow and tedious, but it’s more addictive than cigarettes and biscuits.

Sitting there that afternoon, getting my fix, I realised that I was no longer doing things such as reading books, cooking nice meals and ringing my friends, and that Snapchat was turning my brain into self-hating mush. It had to stop.

In the 2000s, we watched reality TV in which attention-seeking celebs acted out dramatised plot lines on our TV screens. It was trashy but it was entertaining. Now we watch people making tea on our phones. And these aren’t glamorous people who live in faraway lands; these are people you could bump into at Tesco, and sometimes do.

There are no thought-out plot lines on your Snapchat feed, no screaming fights; because this is real life, Snapchat’s dramatic fights usually involve snide, hidden comments from one blogger to another that you need a degree in the ins-and-outs of their lives to even notice. And I had started to notice. I knew too much.

I never felt good after spending time on Snapchat. It’s an app that feeds the ever-growing obsession with “what the neighbours are up to”. It is the apex tool for social comparison. Ten minutes on your feed and you know what designer handbag that blogger just bought, what hotel the girl you went to school with is staying at in Paris, and how many times a week that other journalist goes to the gym.

Other social-media platforms provide this crafted insight into other people’s lives, too, but their formats feels less invasive somehow. Snapchat’s use of video creates a first-hand experience. It can feel so real that, on watching a video, you get the sense that you are friends with William and James, like you really know them. And on some level, you really do.

People also use Snapchat differently to other social media. Snapchat users share more of their true selves, while simultaneously being more adept at selling this version of themselves. Small, curated clips of their daily lives provide a window into the life they have and the life they want you to see. It’s exhausting.

As well as feeling like my life was incredibly dull after a Snapchat session, I was more and more frequently jumping from Snapchat to Safari to buy something. The growing number of influencer’s #ad #spon posts (whether marked or not) were wearing me down.

Recently, the authenticity of these types of posts were called into question by Marissa Carter, owner of Cocoa Brown. She argued that “The value of a blogger endorsement is nothing – there are no bad reviews any more”. But regardless of whether the Snapchatters I was watching were being honest, I was still finding myself lusting for product after product.

I didn’t think I would miss Snapchat, but I have. There are people I watched every day, such as mermaidajade, who I don’t see any more. It feels like losing a close friend (thankfully she has just started a podcast, so I at least get to hear her once a week).

I still have Instagram, Facebook and Twitter, and for now they satiate my social cravings. For some people even one of those platforms would be too much to handle. But for me, it was Snapchat that was the step too far. I read a book last week, I feel no immediate urge to go and buy something and I am happy to inform you that I now spend minimal time in the toilet.

An architect’s cottage refurb: ‘It was a beg, borrow and steal project’
2