Silence on the sidelines: no need to shout, parents 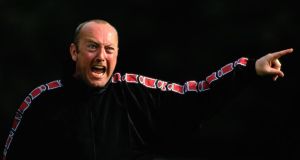 A group of parents have organised a weekend in which parents and coaches will stop ranting at children playing sports. Photograph: Getty Images

Walk past any children’s match, in any sport, on any weekend in any park in Ireland, and you will hear a cacophony of shouting from parents urging their kids on.

This weekend, however, clubs throughout the country will play host to the odd spectacle of underage sport performed to the backdrop of that rare thing in modern Ireland: the sound of silence.

Exasperated by the behaviour of fellow spectators, a group of concerned parents have organised a Silent Sideline Weekend, in which parents and coaches will be gagged. While applause is allowed, all spoken communication, whether cajoling or scathing, will be strictly forbidden.

Inspired by similar initiatives in the US and England, the campaign is designed as an antidote to what Gary Lineker recently termed the “bile and nonsense parents spout” at kids’ games. It’s an issue that has long been ignored at national level in Gaelic games and soccer, but which gained prominence recently when the Dublin District Schoolboys League urged clubs to ban overly vocal parents after reports of verbal and physical altercations.


“You’d have lots of foul language,” says Dubliner Antonio Mantero, organiser of the Silent Sideline Weekend. “You have parents questioning every single decision, ridiculing kids in front of other kids; telling kids they’ll take them off if they don’t do what they’re told.

“Parents are so used to it that they think it’s normal, but it’s abuse, really. All the screaming and the shouting invades a child’s playtime. A children’s pitch is essentially a playground. If adults acted in the same way in a playground, the guards would be called.

“The idea with this weekend is just to let the kids play, to let them make decisions and mistakes by themselves without parents shouting at them.”

About 70 clubs have signed up to the initiative, the first time a Silent Weekend has been attempted across a whole country. While the caricature of the irate coach living vicariously through his young charges is well known, the idea that parents could be holding back their own children’s sporting development comes as a surprise to many – not least, it seems, to the parents themselves.

“Until two years ago I was more interested in him winning than learning the game,” says Kildare parent Desy Balmer, whose son, Adam, plays for Naas AFC and Round Towers GAA club. “I still get carried away with games, but not to the extent I’m screaming. It’s all about educating ourselves as parents and coaches.”


Put under pressure
Rob Connell, children’s officer with Trim Celtic, has seen 11 year olds vomit on the sideline due to parental pressure. “When you send parents or coaches on courses, they think they’re doing the right thing until they stand back. Then they are a little bit aghast.

“Children would get to the stage where they’d be crying on the pitch. The worst I’ve seen this year was a girls’ team being told by coaches to ‘tackle them hard, take them down’. This was under-10s.”

“They used to swear at us at my last club,” recalls Andy Hourihan (13) from Clontarf in Dublin. “The shouting would make us make mistakes and then even the secondary coaches and physios would be giving out. There’d be a lot of adults shouting at you.

“I saw my friend’s little brother playing, and even he’d be getting yelled at. He’s eight.

“I’m playing with Marino now, and I’m much happier there. The manager still wants us to win but there’s no bad language and he doesn’t pick out individuals. At the last club they’d be picking on children.”

Mantero quotes studies that three-quarters of all children give up sport by the age of 13, with serious health and social consequences.

And, while those in charge of coaching children will require Garda vetting from next year, regulating the effect and role of parents in sport is a more emotive issue.

Dublin footballer Bernard Brogan recently stoked the fire by criticising parents who treat GAA training as a “babysitting service”. Yet international best practice suggests young players learn more, and perform better, when parents aren’t there at all. Many elite clubs, Manchester United and Chelsea included, ban parents from games until their mid-teens. European countries such as Spain and the Netherlands, meanwhile, have made certain age grades non-competitive to improve development.

While that is still some way off in Ireland, Mantero says the Silent Sideline Weekend is part of a broader issue of how much freedom we give our children.

“Everything kids do these days is organised by adults,” he says. They can’t think for themselves. There’s so much adult control.”