Are we being served? A new column looks at stock, style and service in shops around Ireland 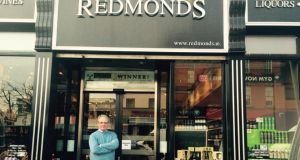 “What makes us stand out from the rest is that we offer stock that nobody else has. We have to be doing something different”: Jimmy Redmond of Redmonds off-licence in Ranelagh

There’s been a Redmonds on Ranelagh Road in Dublin 6, near the triangle, since 1943. It was originally a grocery, run by Mary and Jim Redmond. “Everything was sold loose out of bins, and we bottled the Guinness ourselves,” recalls their son Jimmy, who now runs an off-licence at the site, with his brother Aidan.

Some 23 years ago, the brothers took over the family business, and decided to turn it into an off-licence. “People said we were mad at the time, that we’d never survive.” Extraordinary as it seems now, until 11 years ago, Redmonds was the only off-licence in Ranelagh. Today there are seven.

“What makes us stand out from the rest is that we offer stock that nobody else has,” Jimmy Redmond says. “We have to be doing something different.”

It is a destination specialist off-licence, stocking more than 400 kinds of craft beer, which include ones with such names as Smutty Nose Bouncy House, Chocolate Oak Aged Yeti, and Brown Paper Bag Project, and more than 1,000 lines of wine. The best-selling wines are from France, Spain and Italy, in that order. The shop also stocks a range of specialist spirits, with 22 different kinds of gin alone. If you asked for its flagship gin by name in a supermarket, you’d probably get a pretty weird look, and a shake of the head: it’s Monkey 47, a German botanical gin from the Black Forest in Germany that Redmond enthuses about.

“We think of ourselves as a craft off-licence. There are craft butchers and bakers, who specialise in what they do. We’re doing the same thing, in our local community, and we’re here because we’re supported by our local customers.”

At present, the single most expensive item in the shop is a €7,000 bottle of aged Midleton, of which only 117 bottles were made. “That’ll probably take years to sell, but it’s a talking point.”

More or less opposite Redmonds is Nick’s Coffee, a tiny, permanently busy booth with a couple of benches outside that are almost always occupied, no matter how bitter the weather. Nick Seymour has been selling excellent and great-value coffees – €2 for 8 oz, €2.50 for 12 oz – here for six years. He roasts everything fresh on Mondays. What he most wants to tell readers is not about his range of coffees, but that from now until the summer, all hot drinks are free to anyone over 65.

Why? “It’s a hard time of the year for many people, and it’s cold. I want to give something back to the local community,” he explains. “It’s a place for people to meet. If my nan was still alive, I’d want a place like this for her that she could come to.” Hats off to him. Every community should be lucky enough to have a Nick Seymour.

Ross O’Carroll-Kelly: ‘They want us to vacate this place so they can use it as a love shack?’
2

Let’s go outside: The why, how and where of getting outdoors, whatever the weather
4

Seán Moncrieff: Where am I from? I don’t know
5

Jennifer Rock, The Skin Nerd: ‘I was motivated by people’s perceptions of me as a teenage mother’
9