Sean Moncrieff: Parenting a toddler is about one thing. Poo

Like North Korea, daughter number four could drop the bomb in any place, any time 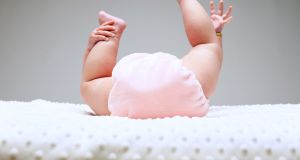 Every day we’re rating and fretting about what she deposits in her nappy, while she, to coin a phrase, doesn’t give a crap. Photograph: Getty Images

I have four daughters and a son. (Yeah – in your face, sustainable planet.) And, just like real people, they have their own ways of communicating.

But daughter number four is the trickiest, mostly because, at 20 months, words have yet to be her thing. There’s a few. She can say thank you as insincerely as any millennial. Boc-Boc is bottle. Beep-Beep is car. And Peppa Pig – usually delivered in the voice of a bitter man at a bar demanding one more drink.

Because of this linguistic inadequacy, she depends on gestures and calls to reveal her inner life. She points. And if that doesn’t work, she can throw herself on the floor and let out a few yelps. This is, of course, a classic toddler strategy, but one she has yet to fully master. None of it is done with the necessary abandon. The yelps are pretty half-hearted and she doesn’t fling herself on the floor so much as sedately take a position there; like she’s settling into a sun lounger on her holidays.

But, like Kim Jong-un, she knows that all her pronouncements, no matter how crazed, have to be listened to. There’s still the Ultimate Weapon. Unlike Kim (at least at the time of writing), she’s prepared to use it.

You can tell yourself that raising a child is some tie-dyed journey into the miracle of personhood. You do that. Keep smoking the St John’s Wort. The truth is the opposite. It’s a helpless fall back into the rank sludge of our primordial past, a shameless state where you’re prepared to hold your baby aloft and jam your nose into its backside, just to be sure.

It’s about poo. It’s always been about poo. In our house the question “How’s Baba?” singularly translates as: “Did she poo yet?” “When did she poo?” “In what quantities?” Poo is the shining avatar our of child’s emotional and physical wellbeing.

This is an actual thing: the Bristol Stool Chart. Look it up, if you dare. It has pictures. Doctors use it to rate, on a scale of one to seven, the various iterations of defecation. Daughter number four regularly cycles through all of them, from “lumpy” to “watery”, each version throwing up its own eye-watering odours and troubling questions. Why does it look like that? Is she teething again? Is she eating enough vegetables? Why is it purple? Are there peanuts in there?

Every day we’re rating and fretting about what she deposits in her nappy, while she, to coin a phrase, doesn’t give a crap. It’s the Madman Theory of baby minding. Just like North Korea, she could drop the bomb in any place, any time. In the car. After she’s gone to bed. Just after you’ve said there couldn’t be any more poo today. You can never let down your guard.

Yes, I’m being a grump. There are golden days, when she doesn’t wake too early and eats all her breakfast and doesn’t demand the TV. She produces the preferred Type Three poo on schedule and doesn’t wriggle or try to put her hand in it while you change her nappy. We’ll put her in dungarees or a pretty dress and say: let’s do something. We’ll bring her to the park and then go for lunch. And she’ll sit in her high chair and gabble away and wave at all the other customers. They wave back, faces beaming. There will be something she’ll agree to eat and something nice for us too. And just as we take our first forkfuls one of us will hiss: do you get a smell?