Cote Calmet Bello arrived in Ireland in 2010. He believes Ireland is more open than his home country of Peru

Cote Calmet moved to Ireland from Peru in 2010 to study music. He now plays professionally with a number of musicians from around Ireland, including jazz trio CEO Experiment and west-African music group Manden Express. 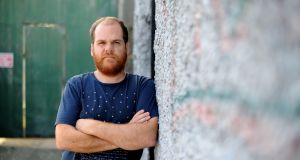 Cote Calmet Bello: It was my first time ever seeing snow but Dublin just felt like home straight away. Photograph: Aidan Crawley

Shortly after Cote Calmet Bello arrived in Ireland in October 2010 the temperatures began to drop. By December, the whole of Dublin was covered in a deep blanket of snow.

“I arrived the year it was snowing. It was my first time ever seeing snow but Dublin just felt like home straight away. I hadn’t ever felt that in Lima. First of all, I didn’t hear any horns from cars so that was an immediate relief.

“I have sensitive ears as a musician and couldn’t bear that sound. It’s unbelievable the amount of stress I got out of my body being in a place where you don’t hear that. Or maybe it was just because there were lots of other redheads here!”

Calmet was born in Lima in the mid-1980s into a household of music enthusiasts. His maternal grandfather loved salsa and traditional Peruvian music while his father’s side of the family were big fans of rock’n’roll.

“My dad would have been pumping Genesis and Jethro Tull. His father was more into Brazilian music. Standing in the middle, I was hearing everything all the time.”

It was Calmet’s father who first suggested his son try playing the drums. He had always dreamed of becoming a professional musician but was discouraged by his own father.

I’m going to let you be a musician because my dad wouldn’t let me do it. I’m gonna let you live my dreams

Calmet already played guitar as a young boy, but his father took note of his habit of constantly tapping surfaces around the house. Calmet was brought to his uncle’s studio where he began jamming with some local musicians.

“That’s how I learned to play drums, by just jamming. Every Thursday there was a jam session and I went there for years. Everyone in the music scene knew about those jamming sessions.”

When he was 20, Calmet moved to Sao Paulo in Brazil to study at the Souza Lima Conservatory of Music where he also learned to speak Portuguese. He already spoke fluent English, having attended an American school in Lima.

“Being able to speak three languages has helped me so much. Nowadays, I play with a lot of people and being able to communicate clearly in a fluent way with musicians is great. The more languages you speak , the more you understand different genres of music. Genres of music are also for me like languages.”

While studying in Brazil, Calmet met Irish jazz musician Ronan Guilfoyle from the Newpark Music Centre in Dublin and decided to transfer his studies to Ireland. He moved back to Peru for a year to save money before making his first trip across the Atlantic.

He arrived in Dublin in 2010 to a city he describes as his real home. “I’ve encountered unbelievable people here with very open mentalities. I think a lot of people in South America have a very closed mentality and I felt a bit infected by that. It took me a while to get used to the change in Europe but then I turned around and realised I’d changed for the better.”

“For example, the fact that gay marriage is now open to people here in Ireland is brilliant. They’re trying to do that in Peru and there’s people going mental about it.

“I was also raised to believe that Peru was the best and that Peruvian cuisine was the best. Even though it was delicious I definitely prefer Indian and Thai cuisine. There’s so many cultures around the world that being closed into one, I think that’s stupid.

“We all live in the same world, we’re all human, so I don’t know what the problem is. People are like ‘you’re from Peru’ and I say, ‘I’m from the world, just like you’.”

While I was waiting for my visa appeal I lost two grandparents, an uncle and a cousin and I wasn’t able to go and see my family

Despite his love for Ireland, Calmet has found the Irish visa process challenging. He arrived on a student visa which turned into a graduate visa once he completed his course at Newpark.

When his application was rejected for a second visa he decided to return to college and do a master’s degree in music performance at DIT, paying for the course through a loan and by gigging and teaching around the city.

He recently completed the master’s and is preparing to apply for the de facto partnership leave to remain with his Venezuelan girlfriend who has Spanish citizenship.

“While I was waiting for my visa appeal I lost two grandparents, an uncle and a cousin and I wasn’t able to go and see my family. I had been told to stay in the country because if I left, my appeal would be over. That was pretty heavy. But my conscience is clean. I know my family wanted me to keep going here in Ireland.”

Calmet now plays with a number of bands with musicians from around Ireland. These include jazz trio CEO Experiment, west-African music group Manden Express and a third band called Haiku. He says the Irish music scene is on “another level” to back home in Lima.

“It could be the passion of the musicians here. Don’t get me wrong, there’s a lot of Peruvians out there who really want to make music but unfortunately we’ve had to leave Peru in order to do that.

“I just love music that is well done. And how do you know that music is well done? It just touches you in the heart and it feels right.”