Sean Moncrieff: I pray life will be as good or get better for my daughters 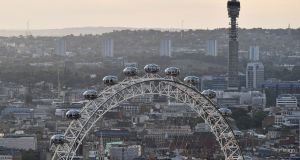 As our glass bubble gently steps upwards, we wonder is someone actually driving it? We decide there probably is, but in time, along with bus and train and taxi drivers, they will be replaced with a computer programme. Photograph: Getty Images

‘A plane is basically a fancy bus,” observes daughter number two. As we are folded into our (randomly assigned) Ryanair seats, the “fancy” part is arguable, the “bus” part, probably not: to her generation air travel is a purely functional matter, scrubbed of any of the glamour it had when I was her age.

Daughter number one says her boyfriend can’t fly Ryanair because the colour scheme gives him headaches. Yet as the yellow and blue bus arcs into the sky, I still get a small zing in my stomach. Long before the digital age, flying was a way to get a physical sense of the planet, of the billions of humans living out their stories.

We’re headed to London, among tourists and students and business people, and as we cut through the clouds I attempt to visualise all the other planes traversing Europe and the people on the ground beneath: trudging into work or playing in the park. Dying. Being born.

First stop when we get into central London is a visit to Selfridges. Not to buy but to experience the genuinely fancy. Bizarre-looking shoes with no price tag. Tiny bags that cost thousands.

The customers are relentlessly stylish and seem to have come from everywhere on the planet: ruddy-faced people from the Home Counties, loud and jaundiced-looking New Yorkers, women with flashing eyes in designer niqabs, a Chinese man methodically takes pictures of Gucci belts. We see Jeremy Clarkson doing some shopping.

The girls are taken with the glamour of the clothes and the price tags, but the internationalism they don’t seem to notice. They’ve grown up in an Ireland of different skin colours and accents. It’s the way things are.

The day before, on the radio, we ran a piece on the conditions in direct provision centres. And, as it always does, it provoked a glut of furious comments: none of them should be here. Asylum seekers are economic migrants, lying about who they are and where they come from. Islam has a “rape culture”. Muslims have come to supplant us. It’s an invasion.

Ripped holes in it

We walk towards Soho, where daughter number three buys a designer jacket she’s been monitoring for some time. The designer seems to have made a perfectly good jacket and then ripped holes in it. We see the actor who played the Dad in In America. The girls think he looks a bit cranky.

As we move through the crowds we’re probably passing people who have been in those boats crossing the Mediterranean or who trudged through the western Balkans. Some of the comments the day before were more fearful than angry. How are we going to look after these people? Since 2015, millions have come here to escape war or climate change or poverty. The largest mass migration since the second World War. A refugee crisis of biblical proportions.

We end up at the London Eye, and the queue isn’t too bad. The security staff use metal detectors and examine bags. One sifts through some records I bought, then solemnly informs me: “I can’t let you on, sir. Not with this music.” There’s a beat, then a cascade of sniggers. He pats me on the back.

As our glass bubble gently steps upwards we wonder is someone actually driving it? We decide there probably is, but in time, along with bus and train and taxi drivers, they will be replaced with a computer programme. We look down at the thick green waters of the Thames and across the enormous spread of what, for the time being, is the largest city in the European Union.

The girls say they like it here. They might live here for a while when they’re older. They are still at the age when they can invent different future lives for themselves. Anything is still possible.

Yet even they wonder if they will they be allowed to come here after Brexit. I say I hope so. It’s all I can say. Then again, they don’t yet know what jobs they will do. And I don’t know if those jobs will exist by the time they are adults.

They give me a group hug, and tell me they are having a lovely time. And like every father, in every part of the world, I hope they will look back on this as a golden time.

And like every father, I also hope that they won’t look back and regard these days as the best of their lives. I pray that things will get better for them, or at least remain the same. I hope.