Seán Moncrieff: What do Fintan O’Toole and Donald Trump have in common?

We tend to have a fixed idea, perhaps wrongly, of what ‘smart’ looks and sounds like 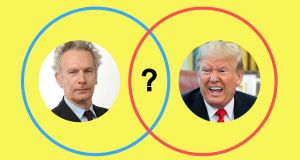 Mastermind: in a Fintan O’Toole-Donald Trump final, O’Toole would know all the answers and Trump none

Donald Trump, weddings and Fintan O’Toole. Bear with me.

Not too long ago I was at a wedding. Wedding tables can be tricky, depending on how much the bride and groom subscribe to the idea that a stranger is a friend you haven’t yet met.

But this time the spooky dynamics of interpersonal relations came right, and we were quickly the table laughing the loudest. Bored people looked at us longingly.

During the course of all this, one of the people at the table made an interesting observation about his job. He’s a national school teacher, teaching 11- 12-year-olds. In his experience, this was a crucial year in their development as it determined if they would turn out to be nice people or not.

They are about to plunge into puberty and teenage self-involvement and so he saw it as his job, through positive reinforcement, to nudge them towards kindness and a general awareness of other people.

He felt that in most cases he made some progress, but he had some failures too. Yet he was unable to explain why this was; whether their nature overcame the nurture he was providing. Or the atmosphere in their home somehow counteracted what he was teaching in school.

Other people, and ourselves, are a mystery; which is why teaching children is so difficult. For the good teachers it seems to require an almost psychic sense of the individual nature of each child and what their particular needs are.

It is also – I’m guessing – a job where one starts to appreciate that the word “intelligent” is close to meaningless. It is part of their job to guide kids towards a standardised system which tests for one version of intelligence, yet if they teach a class of 20 children (this is an idealised version), they are dealing with 20 versions of it.

And because the rest of us have all been through this system, we too tend to have a fixed idea of what “smart” looks and sounds like. To use a local, sycophantic example, Fintan O’Toole fits that template. Donald Trump does not. No one has ever accused him of being intelligent. Apart from Donald Trump.

Yet he did get to be president of the United States and there’s a fair chance he’ll be re-elected next year.

That tends not to happen for people who are as dumb as Trump appears to be. Now, he’s not pretending to be stupid. In a Fintan O’Toole-Donald Trump Mastermind final, O’Toole would know all the answers and Trump would know none of them.

It’s just that Trump would claim that the game was rigged against him, that the correct answers were wrong. That they deliberately avoided subjects in which he is the world’s greatest genius. And he would do this with such utter conviction that many, many people would believe him.

This ability to mould reality through force of will is at the very least a high form of cunning; it’s the sort of thing that should only work in car sales rooms. Yet Trump makes it work in international politics. So perhaps it’s a sort of genius.  It certainly shows that his brainpower shouldn’t be dismissed.

Of course, an education system can’t accommodate every sort of intelligence. You can’t have Narcissism as a Leaving Cert subject.

But specific abilities can be so different that the education system – and the rest of us – often don’t recognise them as such. But a don’t-be-an-asshole module in schools might be an idea. It might have helped Donald Trump.

At the very least, it might make those future adults more pleasant company at weddings.