Seán Moncrieff: How many people actually like their job? 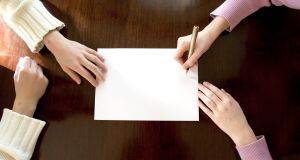 ‘How many people are told by their employer that they are part of some cool-sounding special team in a flimsy attempt to distract from the reality that their job consists of filling out forms?’

They say – whoever they are – that moving house, with all the selling and buying it involves, is the most stressful thing you’ll ever do. More stressful than getting a divorce. It’s not, but it tries to be.

Like getting a divorce, there’s a lot of form-filling. You’d expect that, though perhaps not the volume of it: multiple documents, largely looking for the same information, sometimes for the same institution. And every time the form was produced with a slight flourish, as if the flourisher was convinced that we’d never seen one before, as if myself and herself would be relieved that finally we’d get to reveal the details of our criminal records and diseased bodies.

At every stage of the process, working through brokers, estate agents, insurance people, doctors, banks and solicitors, we found that everyone seemed to regard everyone else as an idiot – and the only way to ensure against this rampant idiocy was to fill out a form. We also found that everything moves at solicitor pace: meaning that if you ask a question, it’ll be 24 hours before you get a reply. They may know the answer straight away, but some unwritten code prevents them from giving it to you.

The only advice I can give her is to avoid conveyancing. It seems to be torture for the conveyer and the conveyed

Daughter number two, heading into the stress fiesta that is the Leaving Cert, thinks she might do law, but she’s struck by how risky any career choice is. She’s done research and some work experience, but if she becomes a lawyer, she really can’t know if she’ll like it or not until she works at it. And by then she will have invested years of her life. The only advice I can give her is to avoid conveyancing. It seems to be torture for the conveyer and the conveyed.

But it’s probably better than working in a bank. While waiting the standard 24 hours to get an answer to the question, “is the mortgage paid off?” I decided to speed up the process by ringing the bank myself. Happily, they were able to confirm that this had happened and they would be issuing written confirmation. They intended to send this confirmation to the house I had just sold. When I informed them that I didn’t live there anymore, the news seemed so shocking that they had to put me on hold.

Eventually I was informed that this completely unexpected development would be handled by the Change of Address Team. I imagined alarms going off in the bank, with Ninja-type figures sliding down firefighter poles. I was told that the team – or Coat as I like to call them – would process this change (in three working days). Then the confirmation letter would be processed (five working days).

Daughter number two speculated about her future lawyer self as I drove her to school for her final day, one that would be filled with water fights and general prankery. And we wondered too what proportion of the working population can say that they actually like their job?

How many people get up in the morning simply because it’s the adult thing to do? Because there are mortgages to pay and kids to clothe? How many people are told by their employer that they are part of some cool-sounding special team in a flimsy attempt to distract from the reality that their job consists of filling out forms?

After I dropped her off, I went back to the house to let in a plumber, there to solve the mystery of our low water pressure. He figured it out and fixed it in 10 minutes and then spent 20 explaining how he did it – so I could learn to do it too – while referring to the spaghetti junction of knobs and pipes around the boiler.

I didn’t understand a word he said. Yet I greatly enjoyed listening to him; simply for the joy he took in telling me.