Seán Moncrieff: Growing up is all about knowing when to say ‘f**k’

We’re not teaching Daughter Number Four not to swear. We’re hoping she’ll learn when it is and isn’t appropriate 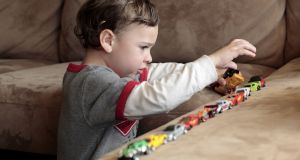 He would line up the cars on the backs of chairs and sofas. It was a delicate operation and inevitably one or two would fall off. When this happened, Son Number One would express his frustration with the phrase “F**k’s sake”. Photograph: iStock

When he was a little boy, Son Number One liked to play with toy cars. But rather than have them race around the place, he reflected what he observed and had his cars stand in long traffic jams.

He may have thought that cars were for sitting in rather than a mode of transport. Typically, he would line up the cars on the backs of chairs and sofas. It was a delicate operation and inevitably one or two would fall off. When this happened, Son Number One would express his frustration with the phrase “f**k’s sake”.

At the time, there was some debate over how to deal with this addition to his vocabulary. Initially, the policy was to ignore it in the hope it would go away. But that was a total failure. He kept using the phrase in an increasing range of (appropriate) situations. So it was decided to intervene: any time he swore, the nearest adult would say: “don’t say that word”. And this did have an effect. Now he expressed frustration with the phrase “f**k’s sake don’t say that word”.

I worry that at some stage I’ll be told: 'She was in the garden, ate a fish pie and called me a motherf**ker seven times.'

But life is a circle and all that. Son Number One grew out of his toddler cursing stage while at the same time ensuring that the baton of bad language was passed on to his siblings. Now Daughter Number Four is in the midst of it. Many years separate her and her brother, yet she has continued the family tradition of f**k’s sake. She says it if she drops a colouring pencil or can’t find a toy. If Herself is giving out about the state of the house, she’ll ask: “is this a f**king sake Mammy?”

I assume this is going on outside the house as well. When I collect her from creche, the workers there run through what activities she engaged in that day and what food she ate or refused. I worry that at some stage I’ll be told: “She was in the garden, ate a fish pie and called me a motherf**ker seven times.”

The swearing kids problem demonstrates how much of parenting is grounded in hypocrisy. We tell our kids not to do things that we did ourselves and continue to do. When she’s a little older, Daughter Number Four will realise that there are “bad” words she is not allowed to say, but will also realise that Mammy and Daddy, despite their best efforts, use them all the time. It may be the first time that she suspects that her parents aren’t perfect; a process that continues into adolescence and the eventual realisation that Ma and Da are actually a**holes.

The trick is knowing when an exemption is reasonable and humane, and when it’s bullsh**t

Only when she reaches adulthood, if at all, will she ponder the odd, contradictory nature of swearing. They are taboo words, yet the vast majority of people use them. In Ireland, we use them a lot; we have preferences. You can hear certain words so much that they lose their force.

Swearing seems to be a psychological and social necessity. Yet it only works if there are tacitly agreed circumstances where swearing is forbidden. Even in this column I’m not fully spelling out the words. If I did, some readers might be offended: even though you know exactly what words I’m referring to. Two letters make all the difference.

The truth is that we’re not teaching Daughter Number Four not to swear. We’re doing the opposite. We’re hoping that when she’s older she’ll learn the conventions of when it is and isn’t appropriate to curse, eventually reaching the point when, as an adult, she’ll be able to swear around the house like the rest of us, but not when she’s looking for a bank loan. As with many other areas of life, she’ll learn that rules aren’t always absolute. Complications and exceptions abound. The trick is knowing when an exemption is reasonable and humane, and when it’s bulls**t.