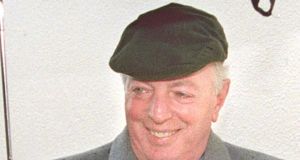 Fred Cogley: He had a love and deep knowledge of all sports but it was his television and radio rugby broadcasts for RTÉ that he will be best remembered for.

Not that his coverage of sport was confined to rugby, far from it. He had a love and deep knowledge of all sports but it was his television and radio rugby broadcasts for RTE that he will be best remembered for.

His working life started as a trainee sports sub-editor straight out of school in the Irish Times in 1953 and ended with his retirement from RTE in 1999. In between, he had a remarkable career which saw him become the head of the RTE sports department and cover 12 rugby World Cups and 11 Olympics.

Throw in the statistic of 49 seasons as a rugby commentator and it quickly becomes clear why so many saw him as someone they knew so well. Born in Dublin in 1934, the only child of Mitchel and Madeleine, he inherited his love of sport from his father who was for many years the Sports Editor of the Irish Independent. His grandfather Fred was also a journalist.

His grandfather’s marriage to a French women Madame Desiree “Toto” Bannard in Santiago Chile was the stuff of movies. Their return to Ireland saw them support the Republican movement in the 1920s and included spells in Mountjoy and the Curragh camp.

What’s more, Madame Bannard-Cogley helped set up the Gate Theatre. By comparison, their grandson’s life was much less adventurous but it was very clearly a career which many would have envied.

Despite his fame, Fred always remained the modest individual who represented St Mary’s College Rathmines at rugby, cricket and athletics. He featured for two seasons as an outhalf on the senior cup team and was even considered good enough to represent Leinster Schools.

Many of his experiences are told in his memoir Voices of the Past. He tells of making his radio debut at the age of 16 in 1950 as an occasional contributor to Sports Stadium, hosted by Eamonn Andrews.

He went on to join the sports department of the Irish Times and in 1956 moved to the Evening Herald. He made his debut as a presenter when RTE was founded in 1962 and was also offered the position of Irish sports correspondent for the Daily Telegraph.

That involvement lasted 30 years. No doubt they were impressed with his capacity to deliver quality copy under pressure, an ability which had been called into question when the sports editor of the Evening Herald asked him to do a short piece of no more than 100 words for an international news agency Reuters on what turned out to be a famous night at Santry Stadium in 1958.

Fred could hardly believe what had happened. Unsurprisingly, the agency wanted considerably more copy, leaving him having to work much later than expected.

With the light fading and only a few people left in the stadium a request came for a quote from Ronnie Delaney. “Everyone has gone.” insisted Fred only to be told that they must have a quote.

“Hold on, I think I see him.” came the reply. Returning to the phone, Fred confirmed that he had just had a word. “Fire away.” said the agency man. Fred continued: “After the race Ronnie Delaney was so impressed with the performance of Elliot he said there’s only one way of stopping him, that’s to tie his legs together.”

.Great quote, he was told. Good enough for the Irish Press to lead with it the following morning. The only problem, of course, it was made up. So, even the most conscientious of reporters, and Fred was definitely one of those, had to use his wits from time to time.

From that day until his retirement he was to prove one of the most popular faces in Irish sports journalism. He also managed to combine a happy family life with his wife Madeline, a union which brought them four children, plus seven grandchildren.

He took great pride in all of his family, taking particular delight when his son Niall was appointed Head of Sport in RTE before moving to Setanta and TV 3. Sadly, Niall’s daughter ClodaGh was badly injured in the Berkeley tragedy two years ago, bringing an already close knit family even closer.

Fred helped Clodagh in her recovery, just as she was of great comfort to him during his recent illness. He is survived by Madeleine. along with the children David, Niall, Michelle and Denise and grandchildren Clodagh, Daragh, Roisin, Katie, Elaine, Eva and Jena.