Ross O’Carroll-Kelly: ‘If you bought a gaff in Tenerife, they'd say they bought one in Elevenerife’ 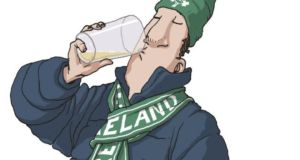 I’m there, “We could just leave her here. She wouldn’t know her way back to the Vico Road. Hopefully, they’ll just deport her.” Sorcha considers this for a surprising length of time, then goes, “No, let’s go and get her.”

She’s only been in the country two weeks, but Pang is finding her way around Brown Thomas, in fairness to the girl. Me and Sorcha are following her around – me like a Sherpa, struggling under the weight of all the clothes we’re apparently buying for her.

“I want that,” she goes, throwing a Petit Bateau yellow raincoat onto the pile, then a Scotch R’Belle Aztec print dress, then a Roberto Cavalli leopard-print skirt, then a Catimini aqua print floral dress, then a Kate Mack-Biscotti black and ivory check dungaree dress. “And this . . . And that . . . And this . . .”

“I’m going to need Uggs as well,” she goes, heading for the shoe deportment with a sense of purpose that’d put you in mind of the Rossmeister General himself attacking the gain line back in the day. “I want them in three colours as well.”

Sorcha looks me, obviously wondering are we doing the right thing here?

I’m like, “There’s eleven weeks left, Sorcha. Let’s just get through it as best we can, then think about the financial cost at a later date.”

And that’s when we end up running into Neasa Turley, the mother of Honor’s classmate, Rain.

After much air kissing and more than a few Oh! My God!s , Neasa asks us how we’re getting on with our exchange student.

“She’s a complete nightmare,” I go. “Makes Honor look like Hannah Montana. We didn’t know when we had it good.”

Sorcha laughs. “My husband is joking,” she goes. “Pang is a lovely, lovely girl and we feel actually privileged to be her Irish parents for the next three months?”

Neasa’s there, “Well, I have to say the same about Xu. She plays nine musical instruments and speaks six languages. And she’s - oh my God – so mannerly. It’s please this and thank you that.”

That’s Mount Anville mothers for you. If you said you bought a gaff in Tenerife, they’d say they bought one in Elevenerife.

Neasa suddenly notices that mountain of clothes in my orms. She’s like, “Oh my God, you’re not buying those for Pang, are you?”

She’s like, “Of course not! No, no, these are, em, just some clothes that we were thinking of sending to Honor. In China. Yeah, no, her luggage never arrived?”

“Because I was going to say,” Neasa goes, “you have to make sure to set the parameters early on. Miss Bowler told us that. She said a lot of these kids come from, like, very rich families. They’ll try it on – if you let them.”

Off Neasa eventually goes, smiling to herself and leaving a vapour trail of Mandarino di Amalfi and smugness in her wake.

“Put those clothes down,” Sorcha automatically goes. “She’s not getting anything.”

I’m there, “Sorcha, think about what you’re saying.”

“Ross, we’re only buying her things so she’ll like us.”

“Er, that’s what parents do, Sorcha.”

She lifts the bundle of clothes out of my orms and hands them to a passing shop assistant. She’s like, “We’ve changed our minds about these items – thank you.”

And that’s when Pang reappears. She’s like, “Will you two hurry the fock up?”

I could be wrong but I think she’s picking up a little bit of an accent.

She sees me standing there with my two orms swinging. “Where are my clothes?” she goes. “Did you stort me a room?”

And Sorcha weighs in. “No,” she goes, “we didn’t stort you a room, because we’re not buying you anything. This isn’t how Honor gets treated.”

Pang looks at me. She’s like, “Speak to your wife.”

Sorcha’s there, “We’ve spoken, Pang, thank you very much. This is a decision that my husband and I have made jointly.”

I look away – just to let the kid know it has nothing to do with me.

“Our own daughter doesn’t get treats,” Sorcha goes, “unless they’re earned.”

I say nothing. Pang says nothing either. She just morches straight past us in the direction of the escalator.

“Oh, that’s very mature,” Sorcha goes. “Storming off in a strop just because you don’t get your own way.”

Pang steps onto the escalator, going up.

Sorcha turns to me and goes, “What do we do now?”

I thinking, We? You got us into this, dope.

I’m there, “We could just leave her here. She wouldn’t know her way back to the Vico Road. Hopefully, they’ll just deport her.”

Sorcha considers this for a surprising length of time, then goes, “No, let’s go and get her.”

Thirty seconds later, we’re on the final escalator to the homeware deportment – and that’s when we hear this sudden explosion of what sounds suspiciously like breaking glass.

We both turn and look at each other and I manage to say what we’re obviously both thinking: “That sounds very much to me like it came from the Villeroy & Boch section.”

We tear up the escalator. People are screaming and running in all directions, panic on their faces. We look across the homeware floor and I don’t think either of us is prepared for the sight that greets us. Pang is having a total conniption fit. She’s growling like a wild animal while sweeping crockery off the shelves onto the floor – we’re talking plates, serving dishes, we’re talking Gastronorm pans.

I’m like, “Seriously, Sorcha, let’s hit the road before we find out that we’re somehow liable for this.”

But Sorcha is too in shock to even move?

And who should happen along at just that moment? Neasa Turley.

“Oh my God,” she goes – a definite smile playing on her lips. “Is that Pang?”