Ross O’Carroll-Kelly: ‘I haven’t heard the word pronoun since I sat the Junior Cert’

Claire and Garret’s friend Saul wants to be called ‘they’ – are they for real? 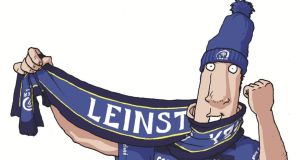 Sorcha takes one look at me and goes, “Oh my God, Ross, why aren’t you dressed?” I’m wearing Cantos and my Leinster training top. I would consider myself very much dressed?

She goes, “Go upstairs and put a shirt and a pair of trousers on. We have guests coming for lunch.”

I’m there, “Lunch? It’s Paddy’s Day, Sorcha. I was planning to commemorate the life of Ireland’s patron saint by getting hammered on Dutch lager and American whiskey.”

I’m a sucker for the old traditions.

She goes, “Ross, I told you about this weeks ago. Claire and Garret are home.”

I’m like, “What? Again?” because she’s talking about Claire from Bray of all places and that complete and utter sap she married. “I’ve seen more of that pair since they emigrated to Canada than I did when they actually lived here!”

“Well, they’re home for a week and they’ve brought their Canadian friend, Saul, with them.”

There’s suddenly a ring on the doorbell and Sorcha goes, “Oh my God, they’re here! And I haven’t even storted making my Jamie Oliver borlotti, pancetta and rosemary risotto!”

I can’t believe she’s going to so much trouble to feed someone from Bray. It’s like giving grapes to a duck.

She insists that we both go to the front door to – this is the actual word she uses – receive them. So it’s, like, hello and whatever else. Garret makes a point of staring at the crest on my Leinster top, then he sort of, like, smiles to himself? He has zero interest in rugby. That’s the kind of character you’re dealing with.

Their mate Saul seems cool enough, though. He shakes my hand and goes, “Saul,” and hands me a bottle of wine – good stuff as well, not the kind that costs €6 in Statoil and tastes like fizzy Brasso.

Then he turns to Sorcha and he says the most incredible thing – although I have to admit that, like a great many things, it goes way over my head. “Hi, I’m Saul,” he goes, “and I use they/them pronouns – are you cool with that?”

Sorcha’s face light up. She’s like, “Oh my God, of course I’m cool with it! That’s amazing! Good for you, Saul!”

I honestly haven’t heard the word “pronoun” since I sat the Junior Cert. If I didn’t know what it meant then, I’m hordly going to know now.

I just go, “He knows his wine,” and Sorcha, for some reason, stares at me in absolute horror. “I’ll say that for him – he definitely knows his wine.”

Half an hour later, we’re sitting around the table, eating this famous lunch and Sorcha happens to go, “So, Saul, Claire tells me you’re in the catering business as well.”

Street food. No wonder Claire is mates with him. She was raised on chips.

“They’re being modest now,” Claire goes. “They do the best street food in Toronto!”

“They is Saul,” Claire goes.

“Saul and who, though? You said they do the best street food in Toronto.”

Claire drops her cutlery on her plate and Sorcha just puts her head in her hands. Garret goes, “That’s what comes from playing rugby – it’s all those blows to the head.”

I’m there, “Sorry, what’s the big deal here? I’m just asking him who he’s in business with.”

“You’re asking them who they’re in business with.”

“No, I wasn’t, I was talking specifically to him.”

“Sorry,” I go, “am I having a focking stroke here or something?”

Saul laughs. He goes, “Look, it’s cool. I’m not one of these terminology tyrants. It’s difficult for some people. Hey, can I use your bathroom?”

“Of course!” Sorcha goes. “It’s the door in front of you at the top of the stairs, Saul.”

When he’s gone, Sorcha goes, “Oh my God, Ross, this is the most embarrassing thing you’ve ever done to me!”

I’m pretty sure it’s not. I could rhyme off a list, although I’m not sure it would help the situation.

I’m there, “I just don’t get why we everyone’s calling him they. It’s like that time Honor had that imaginary friend.”

“Of course you don’t get it,” Garret goes. “You’ve spent your entire life hanging around with other like-minded rugby jocks – you can’t help being ignorant.”

Claire has to throw her thoughts into the mix then. “When Saul said they preferred non-binary pronouns,” she goes, “they were asking you to respect their gender identity. And you can’t even change your grammatical prejudices to make them feel safe and accepted.”

Sorcha goes, “You didn’t mean any offence to them, Ross!”

“Okay, my head is storting to hurt now.”

“Well, either way, I think you owe them an apology when they get back from the bathroom.”

I stand up. I’m going where I should have gone an hour ago. I’m there, “I can’t deal with this anymore. I mean, there’s stuff that’s offensive today that wasn’t offensive a year ago, or even a month ago. If you miss the updates, suddenly you’re the worst person in the world.”

Sorcha goes, “As a citizen, Ross, you should stay informed about these things.”

Saul is back from the jacks. He goes, “You’re not giving Ross a hard time about the he/they thing, are you?”

Sorcha’s there, “Saul, all I can do is apologise to you on my husband’s behalf. Like Garret said, he can be very closed- minded – and rugby is no excuse.”

“But I said it didn’t matter. If people remember, it’s cool. But this is new to people – I understand if it doesn’t trip off the tongue. Words are far less important that attitudes.”

He looks at me then. He’s there, “Where are you going?”

He goes, “Hey, I would love to experience St Patrick’s Day in a traditional Irish pub.”

I’m there, “Right, I’m going to take you to a traditional Irish pub in a place called Donnybrook. Grab your jacket and we’ll go – just me and you, the three of us.”