Ross O’Carroll Kelly: 'He smiles with the same smile he uses when choosing his lobster in Cavistons'

“I come from a generation in which, at the end of a meal, the men would repair to the next room with their Romeo y Juliettas to discuss the great issues of the day” 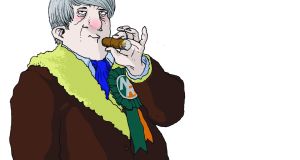 “Thank God for women. Thank God for them. I hope one day we end up with a parliament with lots and lots of them in it.”

The old man steps out of the court with his hair – in other words, wig – blowing in the wind and the grim, businesslike face of a man standing on a riverbank with a sackful of cats.

There’s, like, 30 or 40 reporters standing in front of him. “Are you disappointed?” one of them goes.

He loves being the centre of attention. He pins back his shoulders and clears his throat.

“Yes, of course, I’m disappointed with today’s outcome,” he goes. “A very clever man once said that democracy must be something more than two wolves and a sheep voting on what to have for dinner. I took this action because I am tired – as are many others – with the moral majority in this country tyrannising those of us who aren’t part of their quote-unquote liberal consensus.”

The Supreme Court has thrown out the old man’s appeal against the constitutionality of gender quotas, which means that New Republic is going to have to suddenly find about 20 women to run in the General Election if they’re going to keep their funding. From where I’m standing, he’s not exactly doing his chances a lot of good.

He’s going, “I come from a generation in which, at the end of a meal, the men would repair to the next room with their Romeo y Juliettas to discuss the great issues of the day, while the women busied themselves doing, well, whatever it was that they used to do. Now, those women are with us – they’re not smoking cigars, thank heavens! – but they’re sitting next to us, staring into the flames, trying, like us, to make sense of this bloody well world, and I say Amen to that.

“Thank God for women. Thank God for them. I hope one day we end up with a parliament with lots and lots of them in it. However, I don’t consider that the best way to achieve this end is to force political parties to run candidates, irrespective of ability, merely for the fact that they are women. That’s what this court action was about.

“Charles O’Carroll-Kelly does not have a problem with strong women. Let’s put that calumny to bed once and for all. New Republic is committed to increasing women’s participation in politics, not just by finding any old housewife who’s done a couple of years as the head of the local residents’ association and thinks that qualifies her for parliament. We want to find women of the highest political calibre – women we believe will be ready for ministerial office as first-term TDs. Women like my – I’m proud to say – daughter-in-law, Sorcha O’Carroll-Kelly, the New Republic candidate for Dublin Bay South.”

I turn to Sorcha and I go, “You could have picked a better day to do this.”

She has an envelope in her hand. I watch her tighten her grip on it – I think it’s a word – subconsciencely? She goes, “There’s never a bad time to do the right thing, Ross.”

Of course the nuns got to my wife’s head when it was still soft.

One of the reporters goes, “Charles, your case has been thrown out by the Supreme Court – are we to take it that the fight ends here?”

“I have yet to discuss the judgment in detail with my legal adviser, Mr Hennessy Coghlan-O’Hara,” the old man goes, “but I can tell you that we are considering, as a next step, challenging the Constitutionality of the Supreme Court.”

There’s, like, a collective intake of breath. “Challenging the Constitutionality of the Supreme Court?” someone goes. “Surely that’s an attack on the State itself?”

He goes, “There will be no further questions at this time.”

Then he storts making his way towards his Merc. The famous K… K… K… Kennet is driving him around these days – he’s porked on the quays with the engine idling.

Into the back of the cor we climb. We’ve travelled, like, 50 metres when Sorcha suddenly hands the old man the envelope. “It’s my resignation,” she goes, “from New Republic.”

The old man’s eyes go wide. He’s like, “Resignation? Why on earth are you resigning?”

“Because I disagree with you fundamentally on the issue of gender quotas and I’m embarrassed by the position the party has taken on it. And also because we don’t have any policies.”

“Sorcha, we are the second biggest party in the country, according to the opinion polls. Now is not the time to start alienating voters by talking about policies.”

“Abortion. Water chorges. The refugee crisis. Our relationship with the environment and with Europe. These are the biggest issues of our time, Chorles, and New Republic has nothing to say about any of them.”

“I would urge you, Sorcha, to stay in the party and try to change things from within.”

“I put down 17 motions for next week’s Ard Fheis and Hennessy ruled them all out of order.”

“They should have been submitted in triplicate, you see, and also in the famous national language. You could always resubmit them 12 months from now.”

“Charles, I let you persuade me to run for the Dáil because I thought I could make a difference. But I’m not sure New Republic are committed to the things that I hold dear. I’ve spent the last few weeks reading the collected writings of Aung San Suu Kyi.”

It was a Christmas present from her old man. He totally stole my thunder as well. I illegally downloaded it for her – had it on a USB stick, ready to go, when he showed up on Christmas morning with an actual, physical copy, which he’d had bound in leather, just to make me look bad.

“So you’re turning your back on politics?” the old man goes. “You’ll be a loss.”

“On the contrary,” Sorcha goes. “I’m going to run as an independent candidate. And I’m looking forward to a good, clean campaign, Chorles, in which the issues are to the forefront and neither of us feels the need to go, like, negative?”

The old man smiles at her – the same smile he uses when he’s choosing his lobster from the tank in Cavistons.

“Kennet,” he goes, “can you drop Ross and his wife off here, please? I think she’s been carried far enough.”