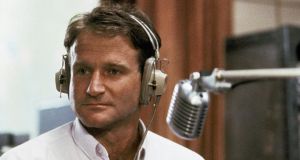 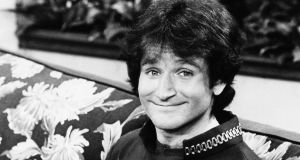 Robin Williams on the set of ABCs ‘Mork and Mindy.’ Williams was pronounced dead at his home in California on Monday. Photograph: AP Photo/ABC

The Oscar-winning actor and stand-up comedian Robin Williams who was found dead in his California home took his own life, police have confirmed.

Lieutenant Keith Boyd, Marin County’s assistant chief deputy coroner, yesterday said: “Our indication at this time is that it is a suicide due to asphyxia due to hanging.”

He confirmed that Williams had been suffering from depression and the coroner’s office had been investigating his medical history.

He said it was not known what time the actor had gone to bed on Sunday, and revealed a forensic examination found he had not suffered any injuries to suggest he had been “in a struggle or altercation”.

He also said he would not be discussing “the note” or “a note” as the investigation is on-going.

“Toxicology testing will be conducted to determine if Mr Williams had any chemical substances in his system at his time of death.

“Toxicology results will not be available for approximately two to six weeks while the testing is being performed.”

Williams was last seen alive at the house he shared with Schneider in Tiburon, north of San Francisco, at about 10pm on Sunday, the Marin county sheriff’s office said.

His representative, Mara Buxbaum, said in a statement that he had lately been “battling severe depression” and added: “This is a tragic and sudden loss. The family respectfully asks for their privacy as they grieve during this very difficult time.”

Williams, who was born in Chicago, brought a hyper-kinetic energy to screen roles and stand-up comedy.

He rose to fame in the television series Mork and Mindy, which ran from 1978 to 1982, in which he played an alien who arrived on Earth in an egg-shaped spacecraft, sent from the planet Ork to observe human life.

The nearly unbroken line of success continued with Aladdin in 1992 and Mrs Doubtfire, a 1993 comedy about a divorced father who impersonates a Scottish nanny to be closer to his children.

He won a best supporting actor Oscar for Good Will Hunting in 1998.

A sequel to Mrs Doubtfire had been announced and it was rumoured that filming would begin this year.

In her statement, Schneider said: “As he is remembered, it is our hope the focus will not be on Robin’s death, but on the countless moments of joy and laughter he gave to millions.”

The White House released a statement by president Barack Obama, who said: “Robin Williams was an airman, a doctor, a genie, a nanny, a president, a professor, a bangarang Peter Pan, and everything in between. But he was one of a kind. He arrived in our lives as an alien, but he ended up touching every element of the human spirit.”

Williams had openly talked about his battles with alcohol and cocaine in the early 1980s, his years of sobriety, and relapse in 2006. He appeared to have recovered but last month he returned to rehab – the Hazelden Addiction Treatment Center near Lindstrom, Minnesota. His representative played down the news at the time, telling TMZ: “After working back-to-back projects, Robin is simply taking the opportunity to fine-tune and focus on his continued commitment, of which he remains extremely proud.”

In a Guardian interview in 2010, he spoke about a relapse into alcoholism, his rehabilitation and his open-heart surgery.

“Oh, God, you find yourself getting emotional. It breaks through your barrier, you’ve literally cracked the armour. And you’ve got no choice, it literally breaks you open. And you feel really mortal,” he said.

Asked if he felt happier, Williams replied: “I think so. And not afraid to be unhappy. That’s okay too. And then you can be like, all is good. And that is the thing, that is the gift.”

Steven Spielberg, who directed Hook, told Entertainment Weekly: “Robin was a lightning storm of comic genius and our laughter was the thunder that sustained him. He was a pal and I can’t believe he’s gone.”

Fellow comic Steve Martin said on Twitter: “I could not be more stunned by the loss of Robin Williams, mensch, great talent, acting partner, genuine soul.”

Tanya Sweeney: You get a lot of brain space back when you stop hating your body
9