Obituary: A reforming Fine Gael minister for education in the 1970s 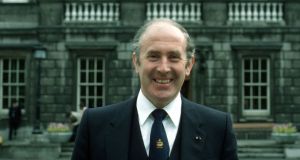 Richard Burke, who has died aged 83, was known as a reforming Fine Gael minister for education in the 1970s and had the distinction of being appointed twice to the then EEC commission, first by a Fine Gael taoiseach and then by a Fianna Fáil taoiseach.

His second appointment to the commission in 1982 by Charles Haughey caused uproar in the Fine Gael party at what was seen as a political “stroke” to keep Fianna Fáil in power. In fact Fianna Fáil failed to win the byelection in Dublin West caused by Burke’s resignation. But Burke was also forced to resign from Fine Gael, an estrangement which caused him much regret.

He was born in Brooklyn, New York, on March 28th, 1932, but the family returned to Upperchurch, Co Tipperary, and Dick, as he was usually called, was educated in Thurles Christian Brothers school. He joined the Christian Brothers after school but later left the order and qualified as a teacher. He taught for some years in Willow Park, the preparatory school for Blackrock College.

He was attracted to politics and interested in Europe, joining the small Christian Democrat party founded by Seán Dublin Bay Loftus. Burke then joined Fine Gael and was elected to Dublin County Council. In 1969, he was elected to the Dáil in the then Dublin South County constituency. He was appointed frontbench spokesman for posts and telegraphs and chief whip. He also began legal studies and qualified as a barrister.

Burke was known to be interested in becoming Ireland’s nominee to the EEC commission in January 1977, but Garret FitzGerald as minister for foreign affairs was lobbying for Justin Keating of Labour who was minister for industry and commerce. The incoming president of the commission, Roy Jenkins, also favoured Keating but Cosgrave insisted on Burke.

This division at home damaged Burke’s chances of receiving a substantial portfolio. After a protracted and bad-tempered night of bargaining in Brussels, he received a mixed-bag portfolio of transport, taxation, consumer affairs and relations with the European Parliament. One of the members of his cabinet or private office was a young Alan Dukes who had been representing the Irish Farmers’ Association in Brussels. He also appointed a then out of work John Hume as an adviser.

Burke retained his seat in the 1982 election which saw Fianna Fáil only able to form a government with the help of Independent Tony Gregory and three Workers Party TDs. Haughey’s “stroke” was to offer Burke the Irish commissionership now vacant following the premature return from Brussels of Michael O’Kennedy to contest the election. The expectation was Fianna Fáil would win the seat for Eileen Lemass in Dublin West.

Burke was flattered by the offer, which he accepted without consulting FitzGerald and hoping to keep it secret until the new Dáil met and Haughey could announce his appointment “in the national interest”. But the news leaked from Brussels as the Fine Gael parliamentary was meeting and Burke was savaged for what was seen as his treachery. He was so shocked he agreed to turn down the Haughey offer. But on reflection and after a visit to Brussels he told Haughey he would accept it.

Back in Brussels, Burke took over the O’Kennedy portfolio, also a ragbag of administration, personnel, statistical office and publications. He was appointed to one of the vice-presidential posts and given responsibility for handling the problems with Athens following the entry of Greece into the EEC. This was a sensitive task which he carried out well.

After his second commission term, Burke helped to set up the Canon Foundation in Europe based in the Netherlands. It aims at strengthening mutual understanding between Europe and Japan through awarding fellowships for research. He served as chairman of the advisory board until 1988.

He is survived by his wife Mary and their five children, Mary, David, Audrey, Richard and Avila. He was pre-deceased by his son Joseph.

Terenure terraced home for €475k is ready to go
9