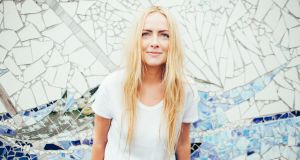 Growing up in Limerick, singing into a hairbrush in her bedroom, Dolores O’Riordan was a huge influence on singer Susie Q.

“She was just this powerhouse... the presence that she had.

“Back then, there weren’t that many strong female leads on stage and my god, she was one of those,” she tells Róisín Ingle on the latest Róisín Meets podcast.

Susie’s debut album Into the Sea, which was written in California, Co Clare and at her home near Bull Island in Dublin, is due out later this year and comparisons have been drawn with her fellow Limerick woman, who died last month aged 46.

“A few people have mentioned Dolores to me and I think it’s probably that you can hear my Limerick accent that there’s a resonance there,” she says.

Since 2015, Susie has been working with Niall “Bressie” Breslin on the organisation A Lust For Life, which aims to end the stigma around mental health in Ireland and offer support to those going through difficult periods of life.

“What we want to do is to help people to create a reservoir within themselves for when a tough time happens, so that we actually have a capacity within ourselves to be able to walk through that time and to be able to reach out and ask for help when you need it,” she says.

On today’s podcast, Susie Q chats to Róisín Ingle about A Lust For Life, the importance of meditation in her life, her debut single Home, which has garnered attention online for its themes around the refugee crisis and immigration, and more.