Sadly, sexism in women’s death notices is not an issue restricted to Colleen McCullough 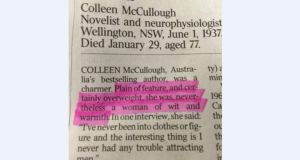 As well as penning 25 novels (she published her last, Bittersweet, in 2013), Colleen McCullough was a neuroscientist. 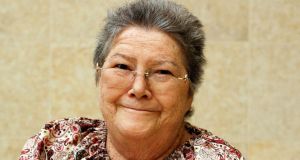 As well as penning 25 novels (she published her last, Bittersweet, in 2013), Colleen McCullough was a neuroscientist. Photograph: Paul Miller/EPA

Goddess help us if a woman who has actually achieved anything ever dies.

Colleen McCullough died in hospital on Norfolk Island, a small outcrop in the Pacific Ocean, on Thursday afternoon. She was 77.

You might remember her for her best-selling novel The Thorn Birds. Anyone of a certain age will anyway.

The Thorn Birds had no need of handcuffs to keep the readers hooked, McCullough’s storytelling did that all by itself.

So it was a bit of a shock to read the first paragraph of her obituary in The Australian.

“Plain of feature and certainly overweight, she was, nevertheless a woman of wit and warmth.”

As well as penning 25 novels (she published her last, Bittersweet, in 2013), McCullough was a neuroscientist.

As a young woman, McCullough had excelled in science. She worked at Royal North Shore Hospital in Sydney, before taking on a researcher role at Yale Medical School in the US, where she worked for 10 years.

That’s right, in between being “plain of feature” and “overweight”, McCullough still managed, according to The Australian, to be a “woman of wit and warmth.”

She also managed to be a best-selling author and a top scientist, of course, but we’ll leave mention of that till the end of her obituary - and the end of her life.

Fortunately women do not appear in the obituary pages of newspapers regularly enough to trouble us with protocol.

Perusing obituaries in most national newspapers, you would be surprised that any women died at all.

And it’s mea culpa from here in The Irish Times, where in tomorrow’s paper we publish will publish five obituaries. Three are men. Two are women. One is Colleen McCullough. The Irish Times will not be referring to her appearance.

Sadly, sexism in the recording of the deaths of women is not an issue that has been restricted to McCullough.

When rocket scientist Yvonne Brill died in 2013, the New York Times obituary led with the following: “She made a mean beef stroganoff, followed her husband from job to job and took eight years off from work to raise three children. ‘The world’s best mom,’ her son Matthew said.”

Admittedly, no mother would be averse to such a citation, but Brill was also a rocket scientist, who in the early 1970s invented a propulsion system to help keep communications satellites from slipping out of their orbits.

You might think the tasty stroganoff and the selfless maternal instinct more important, but that’s not going to get you anywhere next time you are on your phone.

If the obituary writers referred to the external and paternal characteristics of everyone in the same way, there would be no complaints. If they did, all obituaries might read rather differently. . . “Alfred Hitchcock - plain of feature and certainly overweight, he was, nevertheless a man of wit and warmth. He made a few films too.”