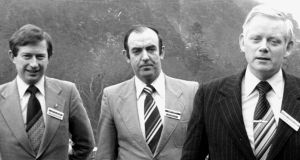 John Marrinan, who has died aged 81, was a key moderniser of policing in Ireland. Always known as Jack, he was assigned to protection duties at the home of WT Cosgrave, and he developed a close rapport with the former taoiseach. He combined his work as a garda with studying at Trinity College and graduated with an honours degree.

When younger gardaí were excluded from a pay award in 1961 the RBG instructed its members to “go slow” in Dublin in implementing traffic regulations. A meeting of protesting gardaí at the Macushla ballroom in Dublin was proscribed. About 160 guards who attended were served with disciplinary notices charging them with discreditable conduct. Eleven men, including Marrinan, were dismissed by the commissioner.

He brought professionalism and dynamism to the hitherto cautious and conservative RBG. He retained a young economist, Garret FitzGerald, to help build a persuasive case that gardaí were significantly underpaid given their productivity and their role in the life of the State and the community.

When discontent became widespread in 1968 he was instrumental in persuading the then minister for justice, Micheál Ó Moráin, to establish a commission of inquiry into pay and conditions, along the model of earlier commissions in the United Kingdom.

The commission was chaired by Circuit Court judge John (Charlie) Conroy but its key driver was Ivor Kenny, director general of the Irish Management Institute. When the Conroy report was published at the end of 1969 its effect on the force was transformational.

Perhaps most significantly, it called into question the unsatisfactory relationship between the force and the Department of Justice and recommended that this be reviewed by “suitably qualified persons”.

The historian of the Garda Síochána Conor Brady describes Marrinan as “the transformational figure in the modernising of the force at a time of great social and economic change”. “His role in driving change was much more significant than that of any of the seven commissioners with whom he served,” Brady says.

“Under his leadership the GRA evolved into a skilful and powerful negotiating body. Almost all of the advantages that gardaí continue to enjoy today in their terms and conditions of service are built on the foundations he established.”

Jack Marrinan was born in 1933 in Lisdoonvarna, Co Clare, one of a family of nine. After attending a Christian Brothers school in Ennistymon, and a short spell teaching in a local national school, he joined the Garda Síochána.

In 1964, he married a Dublin woman, Mary Dempsey, and they lived in the suburb of Rathfarnham, where they brought up three children.

Being on protection duties gave Marrinan more predictable working hours than most gardaí and he was able to take the unusual step - for a serving policeman, and indeed, at the time, for a Catholic – of enrolling at Trinity College, Dublin.

He also played golf and observed every Clareman’s mandatory interest in the fortunes of the county’s hurling team.

Jack Marrinan is survived by his widow, Mary, his sons, David and John, his daughter Clare (Duff), his brothers Micheál and Oliver and sisters Nuala, Rose and Mary.

Tommy was a kind, gentle, friendly and compassionate person and a great neighbour