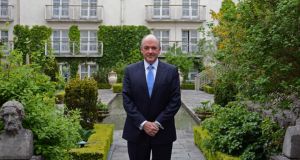 ‘I knew I wanted to be in charge of a five-star hotel from an early age,” says Peter McCann, the man in charge of the most high-profile five-star in the country. “I remember writing to the personnel manager at the Savoy in London to see if I could get a traineeship . . . I just had this thing about five-star hotels. I’d no real experience of them. I just thought it was showbiz.”

Is it showbiz? “Well, not showbiz,” he says. “But there is an element of theatre. I’ve never quite got the chef’s table concept. I don’t want to see a chef. I don’t want to see how it’s done. I want – poof! [he moves his hand like a magician] – and the food is there. How we function back-of-house is our business.” He laughs. “We should be like a duck crossing a pond.”

Service at the Merrion, the 17-year-old hotel set in four Georgian townhouses, certainly is as smooth as a duck crossing a pond. This is largely thanks to the affable, unflappable (not a duck pun) man sitting opposite me.

He had decades in the hotel business – with Fitzpatrick Hotels, Trust House Forte, The Conrad and the Sheen Falls in Kerry – when he was approached to head up the Merrion. “[Two of the owners] Lochlann Quinn and Martin Naughton travelled the world and always felt Dublin was missing a particular genre of hotel, one that could compete with any hotel anywhere in the world.”

So they established the hotel with third owner, the Hastings Hotels. Nowadays, it’s the refuge of choice for visiting dignitaries, from the French rugby team to President Obama to representatives of “the Troika”. But McCann remains tight lipped about high-profile guests. “We never discuss individuals who stay in our hotel. People have said, ‘Are you going to write a book?’ I am in my backside! A few in the business have done it but I think these people are breaking a rule of permanent confidentiality. A hotel is a person’s home away from home. If someone does something in their own home it’s nobody else’s business. Anyway, we don’t have lunatics running around the place. It’s fairly mundane.”

Indeed, McCann’s attention to detail is downright trainspotterish. He keeps folders with photos taken in other hotels while on holiday, and he has spent time analysing the factors that might have led to him having, for example, a great night’s sleep (“Was it the sheets? The blackout blinds? The silence?”). He and his wife Dorothy, the hotel’s brand director, were both up until midnight the night before reading online reviews. “Nowadays the threat is ‘I’m thinking of writing a review.’” He says he contacts every negative reviewer, even anonymous ones. “We try and rectify the problem and turn them into ambassadors for the hotel.”

There was a lot of damage done to the hotel business in the boom, he says, largely by people who didn’t understand the industry. “Developers with spare cash got it into their heads that hotels were cash cows. Boy, have they learned. In one case I said ‘stop, do not do this. This is lunacy.’ There was no market; the location was appalling, the business plan made no sense . . . now, a lot of those hotels are in Nama and have no debts to pay in an operational sense while the rest of us have to pay our mortgages.”

The Merrion did consider expansion projects in the boom years, but they bowed out when rival bidders offered “gaga money”. Sales dropped 25 per cent in one year, as did their prices, but they swiftly remedied the situation with paycuts and redundancies. “A lot of the people made redundant were reemployed 18 months later,” he says.

How you deal with mistakes, he says, is hugely important. Their first was when the very first group checked in. “The water systems failed, the telephones collapsed and I think power went. It was a disaster. The only solution, I thought, was to refund them immediately – a cheque for £54,000. It was a large pharmaceutical company. I remember giving the cheque back out there in the drawing room. I’ll never forget it. But 16 years later they’re still clients.”

He’s entertaining company. He tells me about people trying to steal vases (“The guest told us they were taking a vase. I told them they weren’t”) and about emergency evacuations at 4am after a chimney fire five years before. To be fair it’s largely because I’m pumping him for anecdotes. The reality is that life at The Merrion does seem as smooth as a duck crossing lake. “But you’re really only as good as the last bed you made and the last meal you served,” he cautions. Then he heads up to the roof. There’s a problem with lagging on a tank.

Building bridges: How polyamory made me a better friend, lover and person
9