Peter Crawley on . . . indifference to facts

How information cascades from memes into memories, crushing fact checkers 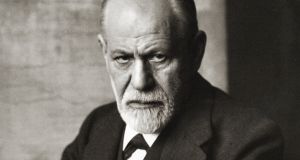 “This [the Irish] is one race of people for whom psychoanalysis is of no use whatsoever” – Freud never said it. Never wrote it. Almost certainly didn’t even think it

Who said the following: “This [the Irish] is one race of people for whom psychoanalysis is of no use whatsoever”? The last time I came across this insight I was reading a spread in a British broadsheet which had distilled the Irish character into terms anybody could understand: as a clickbaitable compendium of pithy quotes. It was Sigmund Freud, of course, the father of psychoanalysis, who famously stubbed out his just-a-cigar when the analyst’s couch encountered a whole race who refused to take it lying down.

Maybe you’ve heard it before? It’s everywhere. In popular books about politics, scholarly texts on terrorism, Irish-American autobiographies, compendiums of witty remarks and insults. In Martin Scorsese’s 2006 film The Departed, Matt Damon’s familiarity with the line actually wins him a date with his hot shrink. And if you’re inclined to comb further back through the archives of all recorded thought, you’ll come to a 1997 musical revue of unapologetic paddywhackery by Frank McCourt, The Irish . . . and How They Got that Way, which put the maxim in song. But then the trail goes cold.

Because Freud never said it.

Almost certainly didn’t even think it.

Why would he? It would be like Apple designing a new iOS that was incompatible with French people, or Mr Motivator devising a workout plan with no conceivable benefits for Norwegians.

So why have so many people chosen to believe, perpetuate and seemingly never query such a blatant falsehood? It’s just one example of how memories and beliefs operate in a world ever more indifferent to fact.

For a sinister interpretation of how we come to believe the incredible, you can always consult George Orwell (or at least until he is claimed by the memory hole). “If all records told the same tale – then the lie passed into history and became truth,” goes 1984. But a recent book by philosophy professor Michael P Lynch, The Internet of Us, has an interpretation that is much more innocent and somehow more alarming.

In an age when phones are smart and people are stubbornly slow to upgrade, information has never been more plentiful or easier to retrieve. The average rainfall of Peru, Jake Gyllenhaal’s height, the route of the Dublin Pride parade, Jake Gyllenhaal’s current relationship status, whether Sigmund Freud offered any opinion whatsoever about the Irish, Jake Gyllenhaal’s last known whereabouts . . . all of this is right at your touchscreen tips.

But “Google-knowing” isn’t the same as learning, and searching is not the same as discovering. “I know Kung-fu!” says an awed Keanu Reeves (is there any other kind?) during The Matrix, still the most wonderful fantasy of instantaneous and effortlessly downloaded knowledge.

But without a cable jacked into his brain how good would Neo be at recalling phone numbers, the world’s capital cities, or the more significant tributaries to the River Shannon? As we become more integrated with our gadgets, Lynch wonders, how would we manage if someone pulled the plug?

Let’s get back to the truth of the matter. Don’t believe everything you read, they say, but the curious thing about our internet searches is that it seems we do. People are more likely to trust digital information: it’s quick, it responds to you directly, the results are ranked by mysterious algorithms of popularity, relevance, even by the patterns of your social media peers.

This is also how information cascades happen, where catchy quotes, flattering stories or heart-rending accounts of injustices near and far snowball from memes into memories, crushing every fact checker in their path. Did some company or Third World country really pay back an astronomical debt in several truckloads of nickels? Nope. Did that surging British (or American) military vessel really engage in a game of chicken with what turned out to be a sardonic Irish (or Canadian) lighthouse? Nuh-uh. But, as impervious as you are to psychoanalysis, you can see why these stories are so appealing, so believable, so damn shareable. Pass it on.

Can truth still get in the way of a good story? It’s just a few weeks since Barack Obama gave a university commencement speech, against the rumble of Donald Trump, pleading that in politics and life “ignorance is not a virtue. It’s not cool to not know what you’re talking about.”

It’s just over 10 years since fake news maestro Stephen Colbert coined the word “Truthiness” to describe a culture led by what feels right, rather than what is. And it’s about two and a half millennia since the skeptics (the Snopes. com of Ancient Greece) cocked an eyebrow at every certainty and asked whether we should think again.

These days, that seems like a very useful tool, to counter every hard conviction with a question. But, then again, what do I know?