Peace bears fruit, from Orchard County to the Moy 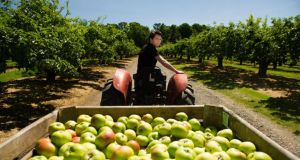 The area around Portadown, Dungannon and Armagh became notorious in the 1970s as the “murder triangle”, and again in the 1990s when sectarian violence broke out over a contentious annual parade at Drumcree. Many young people could not wait to get away. But times have changed. Some of those who left have come back. They are surprised by how glad they are to be home.

Greg MacNeice thinks he has never seen his family’s orchards looking more beautiful. The bud burst phase is over, as is mouse-ear and pink bud, and the brief, glorious peak of the full apple blossom season in May. Now he is excited about the coming harvest and the quality of the cider he will make in September. He lists some of the old varietals he uses: Beauty of Bath, Keegan’s Crab, Lord Lambourne.

MacNeice was born in 1972, the worst year of the conflict. “It was all fairly bleak, and too many dark things happened. It was just abnormal, all that violence and fear.” He left his home town of Ardress in 1991 to go to Trinity College Dublin.

“I was delighted to be gone. Dublin was a different world, a new beginning. I told my father I wouldn’t be back, which must have been hard for him to hear. The family has been growing apples and farming in Ardress for 150 years. I’m the oldest son in the fifth generation. But I just didn’t want to live in the North.”

In 1993 a young couple he had known from school died tragically: the boy was murdered and his grief-stricken girlfriend took her own life. MacNeice was even more convinced he had done the right thing. He travelled, went into business, considered a career in diplomacy. But with the Belfast Agreement promising peace, he felt an unexpected longing for the simplicity of a life in the country, working with his father. He had met Ali, from Protestant east Belfast, and she agreed to make the move. They married and now have children. He launched MacIvors cider two years ago, naming it after his grandmother. Despite the ubiquity of the Bramleys, he says the old trees are still to be found.

“They are nestling behind hedgerows in a lot of orchards. Their apples have a nuttiness that has been lost, and floral aromas.”

The cider is winning awards and selling across Europe. MacNeice says many of his peers have come back to raise their children. “It feels safe here, ” he says.

Mel Allen is amazed by Ulster people’s appetite for sugar. She makes a mean tray-bake, and customers at the Moy Larder in Moy, Dungannon, can’t get enough of them. “We’ve even had ladies coming in after Slimming World,” she says, with a smile. Allen, who is from Melbourne, Australia, has taken to the village known to locals as The Moy. She and her husband, Richard Allen, who is from the area, met in Tasmania. They came back to Ireland last year and opened the cafe.

“We wanted to do something different,” says Richard. “We started off with things like butternut-squash soup. But of course, no matter what you do, it is: ‘Sausage, egg and chips, please.’ So we are doing that now – the best anyone has ever had. But our best-seller is warm chicken pesto salad.”

They boldly put a sign out on the street that says “best coffee in The Moy”.

“We get it from a local company,” says Mel. “It is roasted in Banbridge. They go out to South America and meet the farmers.”

The Moy was the scene of many sectarian murders. Yet today it has a cheerful air. People are friendly. The village is handsome, with tall Georgian houses. There is music in the bars and on summer nights customers sit out under the big trees on the Square.

“I left school in Armagh in 1997 with no qualifications,” says Richard. “I was a postman for a while and then I went to Australia.” The couple tried coming back in 2002 but didn’t stay. Mel got a job on the ferry between Belfast and Scotland. “I saw more trouble on that boat than I’d ever seen in my life,” she says. “It was always real struggle street here,” says Richard. “House prices were going through the roof and everyone else seemed cashed-up.”

Back in Australia, both got good jobs – but found successful corporate life stressful. “We’re laid-back,” says Richard. “The boom in Ireland was over and Australia was one big Irish refugee camp. My boss said we were mad, but we decided to give our jobs up for a year, come back here and see what happens.”

Richard loves sitting in his mum’s kitchen listening to the neighbours chatting. He brought Mel to see the Orange parades on July 12th. “It was interesting to go to again; a lot of my family are involved,” he says.

“I really enjoyed it,” says Mel. “It is not my kind of thing, but the passion of the older people for it was great.”

They’re keeping an open mind about whether or not they will stay, but for now life is good. “I found us a big old stone farmhouse looking out over orchards,” says Richard. “We’ve got some hens.”

The orchards are a new discovery for Des Henderson. Growing up a Catholic on Portadown’s Garvaghy Road, he scarcely knew they were there. He was a teenager during the Drumcree years. “You’d run about for film people, delivering film. There would constantly be journalists using our phone. I was meeting guys who’d been all over the world,” he says. “It was slightly surreal, seeing rows of barbed wire, and moats, Saracens and Chinooks on the TV, your own estate on the news instead of Sarajevo or Chechnya.”

He was lucky to have had an inspirational teacher at his school. “Barry Lynch had an eye for students that needed to be diverted from getting into trouble,” says Henderson. “He ran the video club. He talked through issues with us, and encouraged us to record our experiences. He got us thinking about the ‘other side’. We made a Romeo and Juliet film. He had balls, Barry.”

Henderson’s father was a trade unionist. “I was always on edge, worried about Dad coming home from work,” he says. “My aunt’s best friend was murdered by the IRA. The sectarianism was horrific, and then after the peace process a nasty undercurrent of racism started up. There was just a really nasty vibe – a few murders and a lot of suicides among my generation. I couldn’t wait to get to London. Portadown had become a shithole.”

London was great but he realised he was likely to spend years on the bottom rung of the ladder. “I noticed there were opportunities with Northern Ireland Screen. Then Mum died. I came home to live with Dad.”

Henderson is working for a film company, planning his own films. He also runs marathons, his training taking him out through miles of orchards. “It turns out everything you thought you needed to go away to achieve was here all the time. I am a homebird. I really love Portadown,” he says. “Which is strange.”

Can buying the right petrol save your conscience and the planet?
7