Our wedding story: Saying yes to a Grafton Street proposal

Robert Kearns was ‘enchanted’ by Sarah Walsh . . . but his first date didn’t quite impress 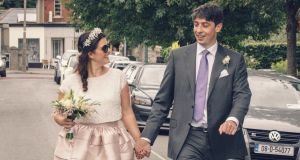 Sarah Walsh and Robert Kearns
In 2010, Robert, a barrister from Slane, Co Meath, was living with friends in 25 Annesley Park, Ranelagh, when they invited neighbour Sarah Walsh, a nurse who grew up in number 27, over for drinks before a night out.

Robert answered the door and was, he says, “instantly enchanted”. So he invited Sarah to a book launch in the newly-opened Aviva Stadium. “A retired judge had published a series of reminiscences and photographs of his old school days and I thought that this would be just the ticket to impress her,” he recalled.

“Gradually, I realised that it was just not the ticket so we implemented plan B – Slattery’s pub and the restaurant next door for dinner.”

Robert proposed outside Brown Thomas on Grafton Street in Summer 2014 and the pair headed straight to Weldon’s jewellers for the engagement ring.

On July 25, 2015, Sarah walked with her father David to the Holy Trinity Church in Rathmines where she and Robert were married in front of 115 guests.

The bride and groom – with bridesmaids Orla Walsh and Sally Horton, best man Graham Kearns and groomsman Henry O’Callaghan – strolled back to the Walsh family home for drinks in the garden organised by the bride’s mother Sheila. Friends Will and MK decorated the house with bunting; friend Mark Twohig supplied ‘Black Tie Safari’, his craft beer label which had pictures of the couple on the labels; and the bride had made the chocolate biscuit wedding cake.

The newlyweds then hopped on the Luas to Stephen’s Green and made their way up Grafton Street to their reception in Fallon & Byrne on Exchequer Street where The Jabronis played Let’s Stay Together for the couple’s first dance.

Sarah, with fresh flowers by Anne Coughlan in her hair, sourced a dress from a Canadian designer which she had made into a skirt and paired with Manolo Blahnik heels. Robert’s suit was by Canali and the couple’s five-month old daughter Charlotte wore pink Baby Dior.

The newlyweds honeymooned in The Burren and Killarney and the family of three live in 29 Annesley Park Ranelagh – Sarah’s late grandmother’s house.