Our wedding story: “I vividly remember the exact second I noticed her" 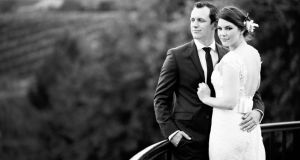 When the Keye family from Capetown, South Africa, dropped 18-year-old Tammy off at Ballymaloe House, in Co Cork, for a three-month cookery course nine years ago, a “lovely guy” opened the gate on their arrival. Michelle Keye said to her daughter: “Tam, I think you’re going to have a lot of fun here.”

The “lovely guy” was Paddy O’Connell, nephew of Darina Allen and owner of Paddy O’s Granola, from Cullahill, Co Laois.

“I vividly remember the exact second I noticed her . . . She was three seats to the right in the demo, in a purple T-shirt and jeans,” he says.

“Pad” visited “Tam” in South Africa a month after the course ended, and their long-distance tale began, but “only as friends”. They took a break while Tammy studied in Sydney for four years. “I told her to go and have a great time. I felt it would work out anyway,” says Paddy, who was nonetheless heartbroken at the time.

Email contact was re-initiated when Tammy moved to Beijing to work with a mining consultant company, and that went on for three years. After two “really amazing” trips to Ireland, including a Christmas in Cullahill and meet-ups in Borneo and Bali, Tammy finally convinced Paddy to visit her in China in February 2012. He came for three nights.

“We really missed each other after that”, she says. “We spent hours and hours on Skype playing pairs [card game].”

Finally, Tammy moved to Dublin in summer 2012 and they were engaged at Ballymaloe House, a year after Paddy asked Mervyn Keye’s permission to marry his daughter. “Every time the phone rang for a year, my dad would run, expecting the good news,” Tammy says.

Two hundred and twenty guests – from Ireland, Britain, China, the United States, Belgium, South Africa, Zimbabwe, Kenya and Bermuda – were invited to Molenvliet Winery in Franschhoek for the wedding on December 27th, 2014.

The bride, who works for Groupon, wore a dress from Ciara Bridal in the Powerscourt Centre. The groom and his groomsmen wore suits from his friend Paddy Sheary’s menswear shop on Dublin’s Clarendon Street.

The dancing kicked off with Galway Girl and carried on until 3am, at which point everyone followed the new Mr and Mrs O’Connell to their house at the vineyard to continue the party into the morning. They wrapped up four nights of celebration at the Keye family home in Capetown, where they saw in the New Year looking at Table Mountain.

We’d love to hear your wedding story. If you’d like to share iT with our readers email weddings@irishtimes.com with a photograph and a little information about your big day