Our Wedding Story: from Galway and Lesotho to a teepee in Laois

It took some last-minute preparation, but Louise Campion and Moiketsi Ramaili managed to devise a unique outdoor ceremony that was ‘everything we wanted it to be’ 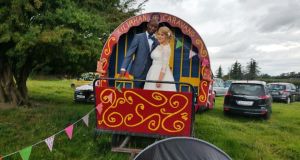 Louise (26), from Celbridge, Co Kildare, and Moiketsi (28), from Maseru, Lesotho, met on New Year’s Eve 2009 in Galway, where Moiketsi – whose mother, Manette Ramaili, was Lesotho’s ambassador to Ireland at the time – was studying at Galway-Mayo Institute of Technology.

Moiketsi moved back to Lesotho and the couple “braved” a long-distance relationship for a year while Louise finished a Masters in engineering at University College Dublin. She then moved to Lesotho for two years before both returned to Ireland in June 2014, having got engaged in 2013.

They married last month at Rockview Walkways, near Ballyroan, Co Laois, in an outdoor ceremony written and conducted by the bride’s sister Ruth. “Rockview was established to provide a social outlet for people with special needs in Laois, and as my fantastic mum is a special needs assistant, the cause is definitely something close to our hearts,” said the bride.

The ceremony included an Irish hand-tying ceremony, a poem written by Louise’s friend Catríona Keevans, a traditional Lesotho song performed by Moiketsi’s family, a blessing from Louise’s granduncle, and music performed by the couple’s friends Barry King and Louise O’Meara.

They had originally viewed the rambling house community hall, but thought the adjacent cowshed was more suited to their vision. “With a lot of preparation, late-night paper pom-pom making, floor laying, drape hanging, furniture building, menu writing, bar installing, bunting sewing, and mural painting, we somehow managed to make the venue everything we wanted it to be.”

The food, served on sharing boards, was by Alex Rogers Catering; bar proceeds were donated to Laois Friends of Special Needs; and Sara Fingleton made the cake.

Musicians were from the local Comhaltas Ceoltóirí Éireann and the married couple’s first dance was to a song called Come With Me, by The Muffinz, a band they first saw together at Bushfire arts and music festival in Swaziland.

Mother and father of the bride are Ann Fingleton Campion and Don Campion; the groom’s parents are Manette Ramaili and Tseliso Ramaili.

Guests camped in a nearby field that night – “it looked like a mini festival grounds with tiki torches, a fire pit, and bunting” – and the bridesmaids slept in a traditional horsedrawn caravan donated by a family member. Louise’s cousin kitted out a teepee for the newlyweds, with sheepskin rugs and a hand-made wooden bed, which they loved so much that they stayed there again the next night.

Louise is an engineer at RPS Consulting Engineers and Moiketsi is an IT specialist for AIB, and they live in Dún Laoghaire, Co Dublin. Moiketsi is planning a surprise honeymoon this Christmas.