Our Wedding Story: An actorly affair in Co Cork 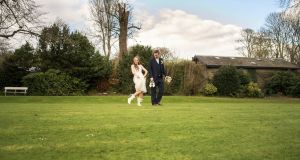 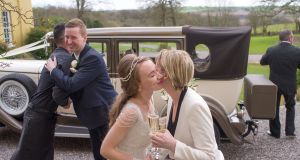 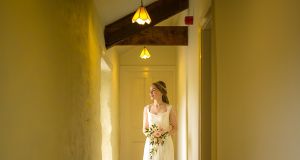 Denis O’ Sullivan and
Irene Kelleher
Irene, an award-winning actress who has appeared in Game of Thrones and Fair City and is currently performing in a one-woman show, Mrs Shakespeare, met Denis, who works at Dell, in 2010 when they were both cast in a play with Kilmeen Drama Group.
“I was living in Ovens, Co Cork, and Denis was in Turner’s Cross, so he arranged with the director that he would drive me up and down to Rossmore for rehearsals, as I didn’t drive. How very thoughtful of him– I am sure he had no ulterior motive at all,” laughs Irene. They were married in the bride’s local church on April 15th, 2016, by Fr Bernie Maloney.
Irene’s parents, Eugene and Marie, met him at the airport 41 years ago when they were travelling to Vienna on their honeymoon and have been friends ever since.
Accompanied by the Delta String Quartet, friend Kate Kirwan sang during the ceremony and flowers were “lovingly arranged” by the bride’s aunt Eleanor Barrett. The groom’s parents are Christy and Kathleen.
“A lot of people say it’s stressful but we all found it so much fun,” says Irene. “One actress friend of mine had reminded me the day before to ‘Be sure and take plenty of dramatic pauses’ and this helped me to savour every moment because I knew the day would fly.”
Samantha Kennedy, a Cork-based fashion designer made dresses for the bride and bridesmaids. All the bridal party’s hairstyles were by a friend Jennie Readman, who worked on The Tudors and Vikings, and make-up was done by another friend Arlene Keating who had worked on a horror feature film with Irene. Marcin Lewandowski was the photographer .
A favourite memory for the newlyweds is arriving at Ballinacurra House in a 1930s Brenchley Convertible and, “just having time to relax and chat to our guests on the beautiful lawn, sipping champagne.”
For them, the second day was also very special. Irene remembers, “we had a little sing-song that evening and my Dad singing Beautiful Dreamer was one of the most perfect moments of my life, one to treasure always.”
Photographer: Marcin Lewandowski, soundofphotography.com
Share your celebration
If you’ve recently married and want to share your story email weddings@irishtimes.com with a photograph and information. We are accepting stories from October 2015.