Our Wedding Story: A Rose of Tralee marries her Galway man 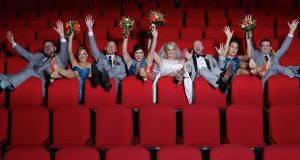 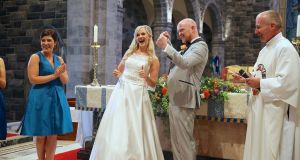 Róisín, who is originally from New Jersey, won the 2000 Rose of Tralee competition, while representing New York, and following her win moved to Ireland.

After completing a Masters in Health Care Promotion at NUI Galway, she worked for the HSE in Kilkenny before moving to Galway. Róisín joined local musical societies and in 2013 met Galway native Nicky in the Town Hall Theatre.

They share a love of the stage and have starred opposite each other in local productions including Hairspray and Annie.

In August 2014, they made the annual trip to the festival in Tralee where Nicky proposed in the famous rose garden.

On August 28th, 2015, Róisín travelled to Galway Cathedral with her mother, Katherine, and bridesmaids Mary-Frances, Niamh and Elaine, in a vintage Volkswagen camper van.

The bride’s dress was from Belladonna Bridal and she wore silver Manolo Blahnik sandals. During the music-filled ceremony, Róisín did a surprise violin performance for her new husband.

The newlyweds drove themselves through Galway in an orange vintage Capri to their reception at the Clayton Hotel where 280 guests – including seven former Roses – gathered.

During dinner a chorus of groomsman Kevin Griffin and friends from the various musical societies sang the title song from the Broadway show, The Book of Mormon.

The bride and groom performed their choreographed first dance and the 15-piece Black Magic Big Band played until late. After hosting a barbecue for their guests the following day, the newlyweds jetted off to Kuala Lumpur and Borneo.