Our Wedding Story: A match made on the London stage

Lucy Close and Jeremy Spong chose to register and celebrate their marriage in the Theatre Royal on Drury Lane, the oldest operating playhouse in the world. 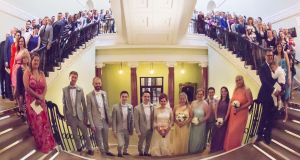 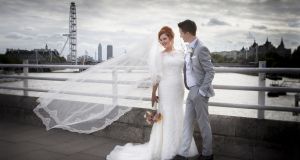 Lucy, from Ballymena, Co Antrim, and Jeremy, from Chichester in West Sussex, met in London while working at the Apollo Theatre on Shaftesbury Avenue.

Jeremy, the son of Merryl and Richard, is a graduate of St Martin’s College of Art and Design, and Lucy, with a degree in Theatre from the University of Surrey, worked as an actor in London before moving into theatre management.

Lucy and Jeremy chose to register and celebrate their marriage in the Theatre Royal on Drury Lane, the oldest operating playhouse in the world.

During the ceremony, there were readings from WB Yeats’s He Wishes for the Cloths of Heaven, and the couple signed the register to a recording of Eva Cassidy singing Danny Boy – a nod to the bride’s mother Delia being a native of Derry. Lucy’s father is Patrick Close.

The groom’s identical twin brother Greg was best man, while Lucy’s sister Paula was chief bridesmaid. She also designed the wedding booklet with its motif of interwoven shamrocks and roses, and the Antrim and West Sussex coats of arms.

Following the wedding breakfast, 110 guests were entertained by video clips of cast members and management personnel of a dozen West End theatres congratulating Lucy and Jeremy. This included a comic routine by David Suchet.

Lucy works in the South Bank Centre, Jeremy in the London Palladium, and they’re planning to honeymoon in the Maldives early in 2016.

Consuming less, but better – the delicate balancing act of the circular economy
6

Ross O’Carroll-Kelly: ‘They want us to vacate this place so they can use it as a love shack?’
7