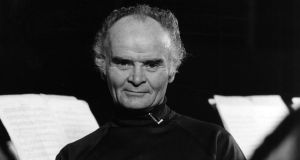 Violinist and conductor Hugh Maguire, who has died aged 86, co-founded the Irish Youth Orchestra, was a distinguished chamber musician and orchestra leader, and an inspirational teacher.

Born into a musical Dublin family – his father, Elias, a schoolteacher and a gifted singer, was described in these pages in May 1914 as “a tenor of much power and sweetness” – he studied violin under Michael McNamara at the Municipal School of Music. He won a scholarship to the Royal Academy of Music in London in 1944, and made his Wigmore Hall début in 1947. He later took lessons in Paris from the Romanian polymath George Enescu, teacher of Yehudi Menuhin, whose instructional methods were highly unorthodox. “He would play the piano. It was really rather like being taught by a conductor. I played the music and he sort of swung me around, pushed me that way, guided me. It was a total musical experience. But he never said up-bow or down-bow. He never said play louder or softer. He didn’t talk about faster or slower. I was just swept along.”

In Paris he supported himself by busking, which led to his arrest and a night in a cell.

He joined the London Philharmonic Orchestra and worked under some of the great conductors of the day, who were picking up their international careers after the interruption of war: Wilhelm Furtwängler, Otto Klemperer, Bruno Walter, Serge Koussevitzky, Herbert von Karajan, and the man he regarded as “the greatest of all conductors ever”, Victor de Sabata. A later great favourite was Pierre Monteux.

He worked regularly with the Academy of St Martin in the Fields from its foundation in 1959, and in the 1980s returned to orchestral work, to lead the orchestra of the Royal Opera House, Covent Garden. He also played in the session orchestra for The Beatles’ Hey Jude, and led the London Symphony Orchestra in recordings under Pierre Boulez, Leonard Bernstein, Colin Davis and André Previn in 1979 and 1991. He conducted the Irish Youth Orchestra (now the National Youth Orchestra of Ireland), which he founded with Olive Smith, for more than 20 years, directing it in a landmark performance of that most taxing of 20th-century masterpieces, Stravinsky’s Rite of Spring, in 1991.

He also tutored the violinists of the National Youth Orchestra of Great Britain, and in 1978 he was invited by Peter Pears to become director of string studies at the Britten-Pears School for Advanced Musical Studies run by Aldeburgh Music, which led him to settle in East Suffolk. His work in Aldeburgh kept him in touch with the most talented young string players, and as well as conducting the Britten-Pears Orchestra (including the première of Colin Matthews’s Divertimento in 1986) he was a generous coach to many young string quartets. He became a Fellow of the Royal Academy of Music in 1959, and taught there as professor of violin until the 1980s, his most famous pupil being Iona Brown, who went on to become the director the Academy of St Martin in the Fields.


Change of mind
He received overtures at various times to take up the position of leader of the Radio Éireann Symphony Orchestra, and nearly did so in 1959, but changed his mind at the last minute. He did, however, join the Arts Council, where he served from 1975 to 1981, when he resigned because of pressure of work. With his second wife, Patricia (Tricia) he set up the national chamber music course, ConCorda, in Ireland in 1994, modelled on the ProCorda training courses in Leiston in Suffolk where he also taught.

His final public appearances in Ireland were in 1994, when he played a memorable all-Mozart chamber music programme at Strokestown Park House at the Music Festival in Great Irish Houses, in 2000, when he conducted a 30th-anniversary reunion of players from the National Youth Orchestra of Ireland, and in 2004, when he gave a lecture-recital in Galway with the ConTempo String Quartet.

His mildness of manner masked a sharper side, which conductors sometimes felt in rehearsal, and which could include severe judgments on eminent colleagues when he found their playing lacking in expressiveness. His own musicianship was profoundly deep and easy, as if music flowed from him without effort, his violin tone never large, usually sweet, and always imaginatively shaped.

He was pre-deceased by his second wife, Tricia Catchpole (née Block), who died in February, and is survived by his sister Monty and brothers Elias and Francis, his first wife, the dancer Suzanne Lewis, and their five children, Simon, Caroline, Rachael, Anna, and Philip.