Oliver Sacks: casting light on the interconnectedness of life

Oliver Sacks, the neurologist and acclaimed author of The Man who Mistook His Wife for a Hat died Sunday at his home in New York 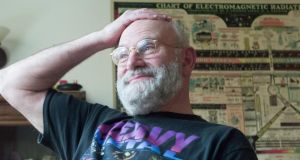 Dr Oliver Sacks in his office in New York in 2001. Sacks, who explored some of the brain’s strangest pathways in best-selling case histories like The Man Who Mistook His Wife for a Hat, achieving a level of renown rare among scientists, died on August 30, 2015, at his home in New York City. He was 82. Photograph: Andrea Mohin/The New York Times

It’s no coincidence that so many of the qualities that made Oliver Sacks such a brilliant writer are the same qualities that made him an ideal doctor: keen powers of observation and a devotion to detail, deep reservoirs of sympathy, and an intuitive understanding of the fathomless mysteries of the human brain and the intricate connections between the body and the mind.

Sacks, who died Sunday at 82, was a polymath and an ardent humanist, and whether he was writing about his patients, or his love of chemistry or the power of music, he leapfrogged among disciplines, shedding light on the strange and wonderful interconnectedness of life – the connections between science and art, physiology and psychology, the beauty and economy of the natural world and the magic of the human imagination.

In his writings, as he once said of his mentor, the great Soviet neuropsychologist and author AR Luria, “science became poetry.” In books like Awakenings, The Man Who Mistook His Wife for a Hat and An Anthropologist on Mars, Sacks – a longtime practicing doctor and a professor of neurology at the New York University School of Medicine – gave us case studies of patients whose stories were so odd, so anomalous, so resonant that they read like tales by Borges or Calvino. A man, with acute amnesia, who loses three decades of his life and lives wholly in the immediate present, unable to remember anything for more than a minute or two. Idiot savant twins, who can’t deal with the most mundane tasks of daily life but can perform astonishing numerical tricks, like memorising 300-digit numbers or rattling off 20-digit primes. A blind poet who suffers from – or is gifted with – extraordinarily complex hallucinations: a milkman in an azure cart with a golden horse; small flocks of birds wearing shoes that metamorphose into men and women in medieval clothes.

Sacks depicted such people not as scientific curiosities but as individuals who become as real to us as characters by Chekhov (another doctor who wrote with uncommon empathy and insight). He was concerned with the effects his patients’ neurological disorders had on their day-to-day routines, their relationships and their inner lives. His case studies became literary narratives as dramatic, richly detailed and compelling as those by Freud and Luria – stories that underscored not the marginality of his patients’ experiences, but their part in the shared human endeavor and the flux and contingencies of life.

Those case studies captured the emotional and metaphysical, as well as physiological, dimensions of his patients’ conditions. Although they tracked the costs and isolation these individuals often endured, they also emphasised people’s resilience – their ability to adapt to their “deficits,” enabling them to hold onto a sense of identity and agency. Some even find their conditions spur them to startling creative achievement.

In fact, Sacks wrote in “An Anthropologist on Mars,” illnesses and disorders “can play a paradoxical role in bringing out latent powers, developments, evolutions, forms of life that might never be seen or even be imaginable in their absence.” A young woman with a low IQ learns to sing arias in more than 30 languages, and a Canadian physician with Tourette’s syndrome learns to perform long, complicated surgical procedures without a single tic or twitch. Some scholars believe, Sacks once wrote, that Dostoyevsky and Van Gogh may have had temporal lobe epilepsy, that Bartok and Wittgenstein may have been autistic, and that Mozart and Samuel Johnson could have had Tourette’s syndrome.

In his later books, Sacks increasingly turned to chronicling his own life – from his deep love of chemistry as a boy in Uncle Tungsten, to his experiments with LSD and amphetamines in Hallucinations, to his coming of age as a young man and as a doctor in On the Move. It was a life as eclectic and adventurous as his intellectual pursuits, taking him from medical school in England to a stint as a forest firefighter in British Columbia to medical residencies and fellowship work in San Francisco and Los Angeles. He held a weight-lifting record in California, and on weekends, sometimes drove hundreds of miles on his motorcycle, from California to Las Vegas or Death Valley or the Grand Canyon.

Animated by a self-deprecating sense of humor and set down in limber, pointillist prose, Sacks’s autobiographical accounts are as candid and searching as his writings about his patients, and they suggest just how rooted his compassion and intuitive understanding – as a doctor and a writer – were in his youthful feelings of fear and dislocation. He tells us about the lasting shock of being evacuated from London as a boy during the war, and being beaten and bullied at boarding school. The rest of his life, he writes, he would have trouble with the 3 Bs: “bonding, belonging, and believing.”

He also writes about the frightening psychotic episodes of his schizophrenic brother, Michael, and his own feelings of shame for not spending more time with him – and his simultaneous need to get away. Science, with its promise of order and logic, provided a refuge for young Oliver from the chaos of his brother’s madness, and medicine promised both family continuity (his father was a general practitioner; his mother, a surgeon) and a way to study and try to understand brain disorders like Michael’s.

Sacks once described himself as a man with an “extreme immoderation in all my passions,” and his books pulsate with his “violent enthusiasms” and endless curiosity: his fascination with ferns, cephalopods, jellyfish, volcanoes, the periodic table – for all the marvels of the natural world; as well as his passion for swimming, chemistry, photography and perhaps most of all, writing. Known as Inky as a child, he began keeping journals at the age of 14. For the shy boy, writing was a way to connect with the world, a way to order his thoughts; and he kept up the habit throughout his life, amassing nearly a thousand journals, while using his books and essays to communicate to readers the romance of science and the creative and creaturely blessings of being alive.

Inclined to living “at a certain distance from life,” Sacks writes that he unexpectedly fell in love – “(for God’s sake!) I was in my 77th year” – with the writer Bill Hayes, which meant relinquishing “the habits of a lifetime’s solitude,” like decades of meals that consisted mostly of cereal or sardines, eaten “out of the tin, standing up, in 30 seconds.”

In February, Sacks wrote in an op-ed essay in the New York Times about learning that he had terminal cancer and had just months to live. “I cannot pretend I am without fear,” he wrote. “But my predominant feeling is one of gratitude. I have loved and been loved; I have been given much and I have given something in return; I have read and traveled and thought and written. I have had an intercourse with the world, the special intercourse of writers and readers.

“Above all, I have been a sentient being, a thinking animal, on this beautiful planet, and that in itself has been an enormous privilege and adventure.” His patients have lost an erudite and compassionate doctor. The world has lost a writer of immense talent and heart, a writer who helped illuminate the wonders, losses and consolations of the human condition.