Obituary: Robert Ford – in charge of army in Northern Ireland on Bloody Sunday 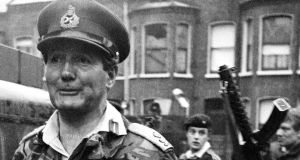 Whatever the other career achievements of Gen Sir Robert Ford, who has died aged 91, his name will be forever associated in Ireland with what became known as Bloody Sunday.

He was Commander Land Forces Northern Ireland (CLFNI) on January 30th, 1972, the date on which soldiers of the Parachute Regiment shot dead 13 innocent civilians, seven of them teenagers, in the Bogside area of Derry.

Ford had been appointed CLFNI in July 1971. The introduction of internment without trial in the following month provoked massive disorder, including bombing and rioting, the shooting of British soldiers, the killing of 11 civilians in the Ballymurphy area of Belfast by the Parachute Regiment and the IRA creation of “no-go” areas in Derry to exclude the RUC and British army.

The Northern Ireland Civil Rights Association (NICRA) decided to hold an anti-internment march in Derry on January 30th. Ford ordered the Parachute Regiment into the city to arrest possible rioters, with tragic results.

The report basically took the side of the British army; it blamed the NICRA for organising an illegal march and asserted that there was a “strong suspicion” that some of those shot “had been firing weapons or handling bombs”.

Widgery chose to believe soldiers’ accounts that they had returned fire and then only at selected targets, although he acknowledged that some of their firing had “bordered on the reckless”.

He seemed to point some blame in Ford’s direction in one of his conclusions: “If the army had persisted in its ‘low-key’ attitude and had not launched a large-scale operation to arrest hooligans, the day might have passed off without serious incident”, although he tempered (if not contradicted) that conclusion with the one that followed it: “The intention of the senior army officers to use 1 Para as an arrest force and not for other offensive purposes was sincere.”

In October 1972, Col Derek Wilford, who was directly in charge of the Parachute Regiment in Derry on the day, was awarded an OBE by Queen Elizabeth, and other soldiers were also decorated for their actions.

In January 1998, then British prime minister Tony Blair announced a new inquiry into Bloody Sunday, to be chaired by Lord Saville.

It reported in June 2010. In contrast to the Widgery version of events, it placed no blame on the march organisers. It was damning of Col Wilford’s role and said that the soldiers “lost control”, fatally shot fleeing civilians and those who tried to aid wounded civilians and then concocted lies to try to hide their acts.

Ford gave evidence to the inquiry. It examined a confidential memorandum from him at the time in which he stated: “I am coming to the conclusion that the minimum force necessary to achieve a restoration of law and order is to shoot selected ring leaders amongst the DYH (Derry Young Hooligans), after clear warnings have been issued.” At the inquiry, he claimed not to remember having written the memo.

Robert Cyril Ford was born in Devon and educated at Musgrave’s College, Gateshead. He trained at Sandhurst military academy, received a commission in June 1943 and took part in the D-Day landings in the following year.

Following action in northwestern Europe, he served with the Royal Dragoon guards in the Middle East. He was promoted to the ranks of captain in 1950 and major in 1957.

He served on the staff of Earl Mountbatten, chief of the defence staff, in the mid-1960s before returning to the Royal Dragoon Guards as a brigade major.

Among his subsequent positions were governor of the Royal Hospital Chelsea, ADC general to the queen, and colonel commandant of the SAS Regiment. He was awarded MBE in 1958, CBE in 1971 (less than five months after Bloody Sunday) and was knighted in 1977.

His main pastimes were watching cricket, playing tennis and attending the theatre.