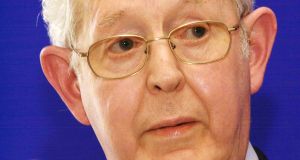 Liam Healy presided over a group which assembled an international business with a turnover of £34 billion. Photograph: Cyril Byrne

Liam Healy, who has died aged 86, was Tony O’Reilly’s righthand man at the helm of his newspaper empire during its great days.

From 1991 to 2000, Healy was group chief executive of Independent News and Media, which had publishing interests in Ireland, Britain, India, South Africa, Australia and New Zealand.

The prestige of owning the London Independent helped attract a glittering array of international directors. Brian Mulroney, former Canadian prime minister, Ken Clarke, former British chancellor of the exchequer, British Labour politician Baroness (formerly Margaret) Jay, and Maurice Hayes, one of Northern Ireland’s most distinguished civil servants, all accepted invitations to join the boards of a multinational which included in its portfolio Wedgewood tableware, outdoor advertising interests, telecommunications, mineral exploration and much else besides.

In contrast to these stellar names, the group chief executive, Liam Healy, was The Quiet Man mark two, a west of Ireland man through and through.

According to journalist Matt Cooper, O’Reilly’s choice of Liam Healy as chief executive in 1991 to succeed the more colourful John Meagher was a conservative one (The Maximalist: the Rise and Fall of Tony O’Reilly). More flamboyant managers like Joe Hayes were passed over.

When Healy stepped down in 2000 – making way for O’Reilly himself to take on the chief executive role – the next year’s annual report could trumpet: “We have assembled a business with a turnover of over £34 billion, starting with £12 million in 1973 and provided our shareholders with a compound annual 21% return on investment during that period.” Healy, the prudent accountant, had delivered.

O’Reilly said that: “Liam Healy essentially brought us into the international realm of Australia, New Zealand, South Africa, India and the Far East.”

But it was also the earlier work of Healy and Bartle Pitcher – his predecessor as chief executive – in shrewdly managing the Independent titles in Ireland which laid the financial foundations for what became an international media conglomerate.

On Healy’s watch in 1997 Irish Independent editor Vincent Doyle’s nakedly partisan “Payback time” front page editorial appeared on the morning of a general election. This skewered a coalition government’s attempt to be re-elected by calling for votes for Fianna Fáil, according to some sources. Others argued that the John Bruton administration’s electoral goose had already been cooked by that late stage.

Liam Pádraig Healy was the younger of two sons of accountant William Healy of Ballymote, Co Sligo, and Frances Thompson, a teacher, of Charlestown, Co Mayo.

After attending St Nathy’s college in Ballaghaderreen, Co Roscommon, he became an articled clerk at JA Kinnear, a small Dublin firm of accountants.

When he relinquished his executive position in 2000, he remained as INM deputy chairman until 2009, with Tony O’Reilly combining the chief executive and chairman roles.

Healy’s last years were made difficult by the onset of Parkinson’s disease.

A quiet and unassuming man, his wife, Eithne Healy, who served as chairwoman of the Abbey Theatre and as an Arts Council member, had a higher public profile than her husband. They had met when they both worked at Roadstone.

He supported her work in the arts and played a crucial role in bringing the National Opera House project in Wexford into being, especially after the death of his friend Jerome Hynes. Eithne Healy and their children, Orla, Ciaran and Eoin, surivive him. His older brother Bryan predeceased him.

The Irish professor involved in introducing European animals to Australia
7