‘No ring, no bring’ means Vogue Williams is off Pippa Middleton’s guest list 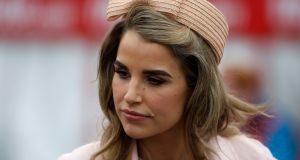 Model Vogue Williams, is patently not invited to the circus, with a ‘no ring, no bring’ policy being cited as the reason. Photograph: Alan Crowhurst/Getty Images

It is with heavy heart that I must announce that Pippa Middleton is at it again. This time, the nation’s sister-in-law is taking her gloriously healthy tan down the aisle, to marry a hedge fund manager called James. You imagine that this union is fulfilling some sort of semi-ancient destiny, runes found carved and glowing in stone beneath the exact point of Pippa’s birth 33 years ago.

And lo, she shall be borne to the earth, and she shall trend on Twitter because of her backoff; and she shall ski and laugh and have hair shiny like a thoroughbred horse; and she shall marry some investment banker called James, because obviously she will.

It feels as if we are missing a great, unseen episode of Made in Chelsea here, where Matthews meets Vogue in a photogenic-but-empty bar to tell her she’s not invited to the do of the year

Thunder will strike when they cement their vows. There is a slim chance the ground will render in two and hell will spill out. These unions always seem to end with some ancient god stirring awake again and demanding the life of the first-born baby.

The James in question is James Matthews, hedge fund manager and millionaire and, crucially, brother of Made in Chelsea smirker-in-chief Spencer Matthews, which adds a heady thrill of TV gloss to what you assume will be an otherwise straight up-and-down Freemason-officiated blood ceremony.

The beef here is that Spencer’s reality-TV girlfriend, Jump survivor and model Vogue Williams , is patently not invited to the circus, with a “no ring, no bring” policy being cited as the reason.

But hark, what’s that: Prince Harry’s ringless new girlfriend, Meghan Markle, is invited? A very curious lapse in the rules. (Conspiracy theorists abound: one overriding theory is that Williams has been dating Matthews for only a few months, so didn’t get in for the RSVP cutoff time. Get deeper beneath the tinfoil, however, and you will learn that, actually, Pippa loathes Vogue because she does too many bikini shots on Instagram ).

Pippa & James made an appearance last night at the ParaSnow Ball. Look how cute they are together! #pippamiddleton #jamesmatthews

It feels as if we are missing a great, unseen episode of Made in Chelsea here, where Matthews meets Vogue in a photogenic-but-empty west-London gin bar to tell her she’s not invited to the do of the year. “Bro,” Spencer tells his girlfriend, reverently, as M83 pounds in the background. “You can’t come to the wed.”

But what about the juicy details of the day? As ever, I am glad you asked.

What is beautiful about this wedding is that it is essentially played in complete darkness, with the press tantalised by slim details of what the wedding won’t be: guests will be asked to bring two outfits, one for the ceremony and one for the reception, leading the detail-hungry Telegraph to pose seven logistical, panicked questions (“Is there a coat rack in the church/reception?”; “Can the price tag be kept in?”).

The reception itself will be held in the garden of Pippa’s parents’ Bucklebury home, which is very “someone spent too much on flowers and now we have to cut corners on the venue” for what is, supposedly, a £246,000 wedding. It’s a Don’t Tell The Bride sort of move. Would I watch a television show where James Matthews accidentally spends £220,000 on a Thai stag do and has to grovel to Matthew Middleton for a mates’ rates loan of his garden? I absolutely would.

Prince George and Princess Charlotte are both getting involved, too, which you would as well if you had unfettered access to the world’s most famous toddlers: they will be page boy and bridesmaid, both essentially useless roles, strawmen titles with no actual use or responsibility, but for some reason important to the country as a whole.

This, perhaps, is what a Britain divided really needs; two brown-haired millionaires eating vol-au-vents together in a marquee, behind a big expensive wall where we can’t see it

The attending children will be looked after, it says here, by the Duchess of Cambridge, who has bravely shirked maid-of-honour duties so as not to detract attention from her sister on her big day, presumably knowing full well how that feels. There will be no hijackings-by-bottom at this wedding, thank you very much.

That is all we know so far, but – with the wedding a little more than a week away – There Will Be Titbits. This is because of who is getting married. In many ways, Pippa Middleton’s life has followed the perfect MailOnline story arc: she made her debut as a famed bum-haver and, by extension, curve-flaunter; she morphed from there into a rich girl made richer by a timidly twee party recipe book; now she is set to become a wife. All she has to do is become a mother and, in 14 years’ time, do a back-to-back sulky photoshoot with the daughter from whom, she writes, she feels distant, and the journey will be complete. It’s as if Paul Dacre made her in a laboratory.

Oh, it really is just the thing to stir the heart though, isn’t it? Just two ordinary people, with gigantic personal and family net wealth, finding love over a £200,000 engagement ring, resolutely not inviting models to their ceremony because it is uncouth.

This, perhaps, is what a Britain divided really needs: in the midst of what I am pretty sure is the 100th election in the past three years, with the 52 per cent still mad at the 48 per cent and vice versa, with leaks and sniping and strength and stability, maybe this is what we need to take our minds off it. Two brown-haired millionaires eating vol-au-vents together in a marquee, behind a big expensive wall where we can’t see it. Fix this crack’d nation, Pippa Middleton. Fix it with the power of your wedding.

Michael Harding: ‘I could hear my boots under the bed, crying all night’
7