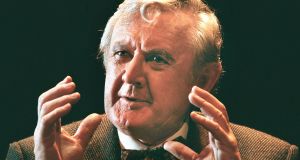 Niall Tóibín, who has died aged 89, was one of Ireland’s leading actors and entertainers. He worked in all areas of entertainment, “except striptease, ballet and the circus”, having left the security of the civil service.

In 1967 he appeared in the stage version of Brendan Behan’s Borstal Boy at the Abbey Theatre. In all he starred in nine separate productions of the play over four decades, and won a Tony award for his performance on Broadway where the play opened in 1970.

Cast in 1969 as “The Political” in Ryan’s Daughter, which took over 18 months to film on location in Dingle, Co Kerry, he remembered “being highly paid for doing nothing but drinking porter and playing poker, with the occasional gawk at the lens of a multi-million dollar camera thrown in to break the monotony”. His other films included Poitín (1979), Eat the Peach (1985) and Far and Away (1991).

His first one-man show, Confusion, was staged at the Gaiety Theatre in 1971, and was followed in subsequent years by four more. From these evolved the cabaret shows that took him all over Ireland, Britain, the United States and Australia.

He was born on November 21st, 1929, one of the seven children of Seán Tóibín and his wife, Siobhán Ní Shúileabháin (Hannah O’Sullivan) of Redemption Road, Cork. The family was Irish-speaking and his father, a travelling teacher for the Gaelic League, spoke “Béarla gránna Shasana” with the greatest reluctance and only in emergencies. In Youghal, where the family spent holidays, they were greeted on arrival with the shout, “Here come the I-ree-tians!”

He attended St Vincent’s Convent and was later educated at North Monastery CBS. He was also a pupil of the School of Music where, at his father’s behest, he dutifully attempted to master the uileann pipes. In addition, he played hurling, was a member of the cathedral choir and enjoyed taking part in school plays.

A member of the Keating Branch of the Gaelic League, which had a busy drama society, he also acted with Compántas Amharclainne na Gaeilge, a bilingual theatre group. Joining the Raidió Éireann Players (the Rep) in 1953, he found himself in a talented, versatile company that included Peg Monahan, Daphne Carroll, Neasa Ní Annracháin, Chris Curran, Frank O’Dwyer and Séamus Forde.

The Rep was famous for the Sunday night play, which was broadcast live and covered an astonishing range of material. “But the everyday reality,” he recalled, “was a pot-boiling job, acting in a secure and pretty well-paid company in conditions which were the envy of all pros outside.”

He continued to act on stage, and also narrated three short films for Gael Linn. In 1964 he took part in The Hostage at the Gaiety Theatre, and two years later appeared in the 1916 commemoration pageants at Croke Park. His first role as a freelance actor, having left the Rep in 1967, was in Brian Friel’s Lovers at the Gate Theatre.

He starred in the RTÉ television series, If The Cap Fits, which was one of the station’s rare comedy successes. Three years later in 1977 a similar series, Time Now, Mr T, met with a storm of protest on grounds of taste and decency. Aggrieved by RTÉ’s failure to defend the show, he increasingly looked to England for work.

He did three seasons at the National Theatre, London, and in the early 1980s appeared in Channel 4’s The Irish RM, playing Slipper, “the perennially tipsy whipper-in of hounds, schemer, adviser, trickster, lovable at a distance but odoriferous close up”. A decade later he enjoyed further success in the Yorkshire TV series, Stay Lucky, and in the mid-1990s he played the grumpy parish priest in the whimsical BBC series, Ballykissangel.

His work for RTÉ included Bracken (the forerunner of Glenroe), Ballroom of Romance and Caught in a Free State. In 1987 he returned to the Abbey to play the Bull McCabe in The Field, later travelling to the Soviet Union with the production.

The two great flops of his career were Crock (1974) and Fearless Frank (1980). The former was an ill-conceived rock-musical based on James Stephens’s The Crock of Gold, while the latter, drawing on the life and loves of Frank Harris, earned him rave reviews but did no business on Broadway.

In 1990 he co-operated with Michael Scott in a new translation and adaptation of The Hostage, based on the Irish text of an An Giall, and retaining the original dramatis personae, but incorporating some of the songs from later versions. It was enormously successful and very well received, but subsequently ran into copyright difficulties and permission for further productions was withdrawn. “A pity, because, modesty bedamned, I think we had concocted, finally, the Hostage Brendan meant to write,” he commented.

He was always interested in politics, and as a young man his leanings took a leftward turn. A Tribune reader, Reynold’s News became his “Sunday missal”. And while in later life he became disenchanted with the practice of politics, he never lost “that hankering after a decent Welfare State”.

Looking back on his life as an actor, he wrote, “We trade in delusions, sleight of mind, fantasies, make-believe. The primary delusion is convincing ourselves that what we are up to matters a damn.”

Predeceased by his wife, Judy (née Kenny), in 2002, he is survived by his daughters Muireann, Fiana, Aisling and Síghle, and son Seán.