New to the Parish: ‘Irish people are less direct than Australians’

After ‘having her arm twisted’ – romantically speaking – by an Irish man she met in Australia, a Malaysian baker ended up working for Neven Maguire in Co Cavan 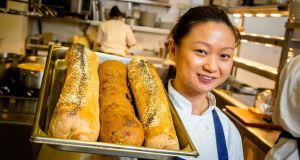 Chilie Chan grew up in a house without an oven and was in her teens the first time she saw someone bake a cake.

“They were doing a demonstration in my school as part of our home economics. I watched the guy mix the flour, the sugar, the eggs and butter, and then you had a cake. I thought it was like magic.”

Her mother sometimes bought cakes as a treat for the family, but most households in her hometown of Serdang, outside Kuala Lumpur in Malaysia, didn’t see the need for an oven in the kitchen.

“I think my mum bought an oven once and then never used it,” she says. “Western pastry – that’s what we call it – is not something we had in our childhood. So I started teaching myself how to bake.”

Her parents supported her decision to move to Australia after she finished college but were surprised to hear she had chosen to study patisserie in Melbourne.

“I loved pastry and I wanted to go to Australia to do a course to become a pastry chef. I think my parents were just like, ‘Okay, let her go for it’, and thought I would give up at some stage.”

Chan quickly fell in love with her new Australian home and the appreciation locals had for fresh food and cooking. “I loved their food culture. They have a lot of quirky, hidden-away cafes. People cook a lot there and they love fresh markets and fresh food.”

After her first semester in Melbourne, she and her friends decided to spend the summer working on a fruit farm in the countryside. There she met an Irish man, Brian Farrell. He had already spent four years working in Auckland, New Zealand, before moving to Australia for a year. In order to renew his visa, he had to spend a summer picking fruit, on a farm near a town called Swan Hill in rural Victoria.

Farrell quickly noticed the Malaysian girl working on the farm and tried speaking to her on a number of occasions.

“Every day the work roster was printed on a board, and one of the days I deliberately waited for Chilie,” says Farrell. “I saw her go check the roster with friends, and I thought, I’ll go check the roster now too. Of course, every time I tried to start a conversation she’d just look away from me.”

Farrell eventually succeeded in grabbing Chan’s attention, and the couple began spending time together. “I had to twist Chilie’s arm a bit to come around,” says Farrell. “She took some convincing.”

The couple continued to see each other back in Melbourne and quickly moved in together. They spent three years living in Australia until their visas ran out and then decided to move to Malaysia.

They shipped all their belongings back to Serdang, moved in with Chan’s parents and began searching for work. Aside from the month Chan spent helping her friend to set up a restaurant in Shanghai, the couple struggled to find employment. After nine months, they moved to Ireland.

“We were trying to decide between the two places – Malaysia and Ireland – and which would be better for us,” says Farrell. “In Malaysia the weather is better, and it’s cheaper.”

“But sponsorship for a visa for Brian was difficult,” says Chan. “There was no partner visa, only a spouse visa.”

In December 2012 Farrell arrived back in Dublin, followed a few months later by Chan.

“It wasn’t my first time moving away from Malaysia, so I felt okay,” she says. “The first time I moved to Australia, that was scary.”

Her parents were sad to see their only daughter move abroad again, but they also encouraged their daughter to embrace life on a new continent. “Obviously they were going to miss me. But my dad had always said he wanted me to find a better life, like generations of family before me. My great grandfather moved from China to Malaysia to find a better life. These things happen.”

Before the move, she expected that Irish people would be similar to Australians. “I thought, It’s an English-speaking country, so it won’t be that different from Australia. But it was a complete culture shock. Communication was very difficult. I think Australians speak really clearly, and it’s clear what they want. Irish people are more indirect.”

The couple spent a few months in Dublin and then moved to Kerry, where Farrell did a course in broadcasting. Chan found a job in a small cafe and began to settle into Irish life.

Farrell was pleasantly surprised to discover his girlfriend was eager to learn about Irish culture. “While we were living in Tralee, Chilie would always read the Irish papers, buy the RTÉ Guide and watch RTÉ1 or RTÉ2. She even watched TG4. ”

“I didn’t want to be just working here,” she says. “I wanted to understand the country.”

She began to read books about the history of Irish food but was disappointed to discover how little fresh produce was available in shops. “People rely on supermarkets too much. They should be cooking fresh food like they did years ago.”

The young chef’s enthusiasm for Irish food paid off when she came across a tweet from Neven Maguire, whom she already knew to be one of the top chefs in Ireland. The Twitter message was advertising a job at Maguire’s MacNean restaurant in Blacklion, Co Cavan.

Chan sent in her CV and was invited to do a three-day trial at the restaurant. A week later she was offered a job, and the couple moved to Co Cavan.

She loves her work in the restaurant and says her parents are very proud that their daughter can develop her love of baking in her new home.

Farrell is also proud of his girlfriend’s achievements since moving to Ireland. “The fact that she could move to a brand new country and is now working at the best restaurant in Ireland, it’s amazing.”

She enjoys living in Blacklion, which she describes as a friendly town where every neighbour knows her name. “It wasn’t easy when I first arrived in Ireland but it’s definitely getting better. It’s been a bit of a roller coaster.”