New to the Parish: ‘I felt really safe in Dublin because of the smoky smell’ 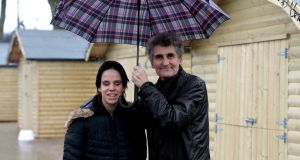 “I felt this gentleness coming from him, which ever since I’ve found in a lot of Irish people.” Melanie and Paul Leamy in Dún Laoghaire. Photograph: Cyril Byrne

The first time Melanie Leamy stepped outside her apartment and on to the streets of Dublin, she was struck by the distinctive smell in the air.

“There was this absolutely beautiful, smoky smell hanging over Dublin, particularly on autumn evenings, a smell I had indeed noticed on all my visits before, as if people were burning coal or turf,” she says. “I remember feeling really safe because of the smoky smell, but also because I felt really welcome. I felt I had found a way of living that was new and yet felt so familiar.”

Melanie (33) was acutely aware of the sounds in her new hometown. “I will never forget when I first heard the foghorn. The sound is so melancholic; it seems to come from so far away and from such a lonely place.”

She also noticed the sheer volume of police cars and ambulances speeding by. Before moving to Ireland, Leamy spent most of her life in the small German town of Marburg. Moving to a capital city took some adjustment.

She has a visual impairment that means she can only see light and dark. She uses a cane when she walks. When she arrived in Ireland in 2010, she had to rely on her other senses to explore her new surroundings. “I suppose because of my vision impairment, my other senses are a lot stronger, especially the senses of smell and hearing,” she says. “Part of my getting used to my new life was to leave the house on my own: to go down to the shops; to go for a walk in the park; to take a bus in to town and walk around Grafton Street. I didn’t know where I was going and wasn’t able to use a map. I simply had to take a chance and maybe even get lost.”

Her determination to explore Dublin alone stems from her confidence in the kindness and empathy of Irish people.

“Wherever I am, I am not alone. The sense of ‘we’ instead of ‘only me’ is really beautiful. And it is really important for a person with vision impairment to live in a society where there is a strong community spirit. We sometimes need to ask other people for help or assistance. And because people are generally so friendly here, this is easy to do.”

Melanie first encountered this Irish “gentleness” when she met Paul Leamy at a mindfulness meditation course in the university town of Marburg in 2009. He is now her husband.

“I was aware that one of the Irish guys was sitting behind me and I turned around and asked him whether he needed a translation. I kind of felt something clicked between us instantly. I just felt: if I ask him this question something will profoundly change.”

“I felt this gentleness coming from him, which ever since I’ve found in a lot of Irish people. He was very calm and peaceful, but at the same time the eagerness with which he accepted my offer was so full of excitement and power.”

The two kept in touch through phone calls and email. A few months later, Leamy travelled to Ireland. “We went to the Aran islands, and especially there I felt there is such a thing as a former life,” she says. “I am sure I have been here and I have been Irish.”

Melanie, who speaks German, English, French and Spanish, was studying to become a bilingual secretary in Germany, and arranged to come to Ireland on a work placement. “Once we had been together two months, we just knew we wouldn’t want to be apart again. I went back to Germany and completed my course while Paul looked for an apartment for us.”

In June 2010 Melanie arrived in Ireland. As a polyglot who had already worked for the German civil service, she hoped to find a job quickly.

“I spent most of autumn 2010 sending out my CV and attending job interviews that were all unsuccessful,” she says. “I got increasingly frustrated with the fact that a person with fluent German, fluent English, French and some Spanish would be turned down everywhere and, from my point of view, simply because of the fact that I don’t have sight.”

In 2011 she did a course with Aware – a voluntary organisation that supports people affected by depression – and subsequently did a nine-month unpaid internship with the charity. She was grateful for the opportunity to train with the charity but eventually left in search of paid work. Nearly four years later she is still looking for a full-time job.

“It is appalling that people like me who are well-qualified don’t get the opportunity just because employers are too insecure to take you on,” she says. “You don’t cost them a fortune or anything. You can bring your own computer, your own cane, you can bring everything.”

In 2012 she began teaching classes in mindfulness meditation and reiki – an energy healing technique – while she continued the search for employment. “I thought to myself, If I keep sitting at home looking for work and not finding anything then it will make me terribly depressed and my confidence will go down. I felt my frustration was growing and I decided I needed to do something.”

She offers classes through online deal websites, which means she earns very little from her sessions. “What I’m doing is more or less still voluntary, but at least I have a schedule and something to do.”

She often worries about the future. “There is a huge age gap between me and Paul; he is 66 and retired since June. My thought has always been, How can I support our family if all he has coming in is the State pension?”

Paul and Melanie got married in July. She misses her family but speaks to her brother and parents on the phone every week.

“It’s been a wonderful five years, but also tough because there has never been a moment where I felt I didn’t have to worry. Of course I miss my family, and at times it would be nice if they were closer, but I couldn’t imagine living anywhere else.”