My Obituary: An epiphany served up with coffee

The very-much-alive Joan Mulvihill, chief executive of the Irish Internet Association, helps pen her own obituary: ‘She was having brunch for one on her 40th birthday when she finally accepted the great love she had lost’ 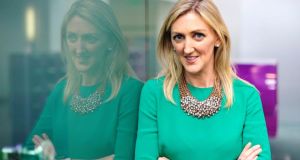 Joan Mulvihill’s motto: ‘I will think more about how I make others feel and less about how they make me feel.’ Photograph: Aidan Crawley

Joan Mulvihill regarded herself as unaccomplished. She was almost 42 when she passed away. She never married, had no children and no life plan. By that account, there is no physical legacy of her existence.

She is survived by her family and friends. That was how it was with her: you survived her as one might survive any close encounter with a force of nature. She was at times quite terrifying.

A friend was moved to comment, “I loved a Joan rant. Especially ones that displayed how supremely intelligent and caring you are.”

Another friend: “When Joan cared deeply about a person, an idea or a cause, she was a fierce and unstoppable force.”

Once she set her mind to something, that was it. She started running as a bit of a joke but within six months she had run her first half-marathon and within two months of that, she had run a second in less than two hours.

She liked to paint. She would paint furiously for a few months and then she was done. She also loved to read: 10 books on holidays but none for the rest of the year. She loved her work and went three years without annual leave, then took three holidays in one year. “All or nothing” was her way in everything.

Her career successes in the Irish Internet Association surprised everyone, especially Mulvihill. For all her energy and exuberance, she had a lot of self-doubt. She knew nothing about tech when she started, but she attacked that learning curve with the bravado of a four-year-old on skis.

She was in front of a camera talking about cloud computing six hours after looking up the term online and only 24 hours after taking up the job. Was she faking it or did she just pick things up fast? No matter; she thrived on being out in front.

She was at ease when she was leading. She never had ambition to be a leader but was driven to have an impact. The responsibility of leadership was the price she paid for that impact. It made her happy. And that is how she would want to be remembered: happy with who she was.

It had taken her a long time to find herself. She often recounted the story of how it happened. She once described finding herself as one would describe finding a fiver down the back of the couch. It happened in Chez Max, a restaurant beside Dublin Castle. She was having brunch for one at about midday on May 25th, 2013: her 40th birthday. “It was like they served my coffee with a side order of epiphany,” she had said.

It was the day she made peace with everything. She accepted the great love that she had lost. She accepted the happiness that comes from a little love from a lot of people. The sum of the little loves had been enough to make up for the loss of one great love. She once said that she would never leave a gaping hole in any one person’s life, but she hoped to leave little dimples in lots.

And they were all there for her at the funeral. Her friend John gave a short eulogy quoting a birthday card he had once written her: “To someone who is kind for no reason other than to be kind.” Those words had meant a lot to her even if she had never believed herself worthy of them.

Mulvihill died in beta mode: a work in progress. She never had a big plan, but in 2015 she had made a big resolution. She had been inspired by a sermon of Fr Arthur’s (St Brigid’s Parish, Cabinteely). Her resolution was found on a Post-It in her wallet. It read, “I will think more about how I make others feel and less about how they make me feel”.

Never making it to Argentina. She had booked and paid for a holiday there for spring 2009 but lost her job and cancelled.