‘Most tourists want to hear the real Dub accent’

A Diageo scheme takes 15 young, long-term unemployed people from working-class areas of Dublin and trains them for the hospitality industry. We meet three of them 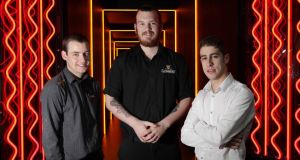 The Learning for Life programme, run by the drinks multinational Diageo, ran for the first time in Ireland this year. It was aimed at young people who were long-term unemployed, and operated in conjunction with the Department of Social Welfare, through which the candidates were recruited.

The young people interviewed for the scheme all come from Dublin 8, home of the old Guinness complex, which now houses the Guinness Storehouse, the country’s busiest tourist attraction. Three hundred people were screened by the Department, and 15 made it through that process.

“We spent a lot of time choosing the people,” says Peter O’Brien, corporate relations director of Diageo in western Europe. The scheme started in Caribbean and South American countries in 2008, training people from poor areas to work in the hospitality industry. “We’re very clear on Learning for Life that we understand the hospitality industry, and we stick to what we know, ” says O’Brien.

The 15 successful candidates were given seven weeks of intensive training at the Guinness Storehouse. In June there was a graduation ceremony, presided over by the Minister for Social Protection, Joan Burton. The candidates were overwhelmingly male; just one female graduated. Until the end of September, they are working out their on-the-job contracts at hotels, bars and tourist destinations around Dublin. Diageo will run the scheme again next year.

Carr is a doorman at the Fitzwilliam Hotel on St Stephen’s Green. “I like the uniform; it’s very dapper,” he says. “You feel a sense of class when you put it on.”

Carr lives with his mother on Kevin Street, and is so confident and personable that it’s hard to believe he was unemployed for a long time. “It had been ‘no dice’ for a good while. A bit of seasonal work in Dunnes. When you’re on the dole you stagnate.”

He is very enthusiastic about the Learning for Life programme. “Only 15 of us got picked,” he says. “We’ve done restaurant skills, bar skills, health and safety for the kitchen, first aid . . . It was seven weeks, and it was eye-opening stuff; just setting the table for a restaurant a la carte.”

He wanted to work in a hotel. “I like the whole meeting-and-greeting thing. I’ve been two months in the Fitzwilliam now. It’s always something new every day. It’s a fantastic place. I’d like to stay on here. The staff are so good, so kind, giving training all the time. You have to give it to them.”

His mother is delighted. Does he think it is at all patronising or exploitative of Diageo to take young, working-class people and train them for low-paid jobs in the hospitality industry? “We’re all really grateful,” he says. “It was either that or queue up at the post office every week. You have to commend [Diageo] really. I really hope they do it again: give another 15 or 20 people a chance.”

Wilson is 22 and has a daughter, Emily J, who is nine months old. “When she was born, I thought, Now I really, really need a job. It became survival then.”

Wilson heard in April that he had been accepted on to Learning for Life. But he had done a course previously, also organised by Social Welfare. “That company promised the world, but it never delivered any work for us. So when I came here, I was a bit hesitant. The Learning for Life organisers, Angela Smyth and Fiona Candon, were very good. I asked them a couple of times were we being misled. But they were very organised. Every day they had a list of what we were going to do. And you could phone them any time.”

Wilson, who was born in the Coombe but lives in Pimlico with his mother, sister, girlfriend and daughter, now works in the Guinness Storehouse, which at the time of this interview was heaving with tourists.

“Five thousand visitors a day,” says Wilson. “They treat us so good here. We get lunch off them everyday for free. The team leaders are so helpful. My main aim would be to stay here. Although Smithwicks has another experience like this in Kilkenny. I’d move down to Kilkenny with my girlfriend if there was work there.

“I feel happier, more confident and better about myself now. I would have thought the course was beyond me. I think it was all the rejection from all the other places.”

Wilson rejects the suggestion that some people might make: that this is an easy option for Diageo.

“No, they’re wrong. They’ve given us hope, given us confidence. They’ve shown big companies are prepared to take a chance on people from a working-class area. Not once have they put us down. I think more big companies should do this, because they have the financial support to pull off what they promise you.

“Eventually I’d like to own my own bar. I’m not a big drinker, even less so since I started here. I used to be a quiet person, but now I leave here and I say hello to people on the street.”

Carey grew up in Oliver Bond flats and now lives in Thomas Court Bawn. He went to school at the CBS on Synge Street, “but I was always on the hop. I just didn’t go in. The only class I went in for was history. I love history.” He still managed to get three honours and four passes in his Leaving Cert, which he sat when he was 16.

But there was little encouragement for his love of history, or anything else. Carey became a shelf packer in Dunnes Stores.

Now he is a barman in Madigans on O’Connell Street. He enjoyed Learning for Life. The historical tours of Dublin were his favourite part, but he says he learned a lot of other things, “like setting the table in the restaurant. I thought it was just a knife and fork!” The only thing he didn’t like was wine. “Horrible it was.”

Carey has a family member who worked for Guinness. “My nana. She still goes there for her swim.”

He’s hoping to travel with his new bar skills. He doesn’t want to go to Australia, however: “Everyone I know is in Australia.”

Carey does not believe that Diageo have taken the soft option with Lessons for Life. “No, they’re right. The majority of tourists want to hear the real Dub accent; they don’t want to hear the D4 accent, know what I mean? I’d say, don’t be jealous that they’re doing something for working-class people.

“I told all my mates about it, and they all want to do it. Most of them feel like thicks, because the bird’s out working. That’s hard. I know full-time sparks and they can’t get jobs. I think they done it good, Diageo.”

Hugh Wallace: The day I stopped drinking changed my life
4

Health Hints for the Home: Worms in children
7