More than a cúpla focail: How to learn a language in just three months 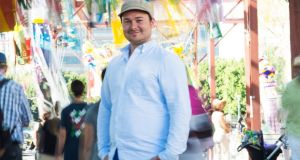 Benny Lewis: ‘Language learning would be where you study grammar and you study tables of vocab. You do an exam, and maybe after a few years you might be able to get by in the language. Language hacking, on the other hand, gets you speaking from day one’

Thinking of learning a new language? You need to talk to Benny Lewis. The 35-year-old Cavan man has been called “the Irish polyglot” and “the Eckhart Tolle of language learning”.

He speaks 11 languages and is currently preaching his DIY language gospel through a successful blog, TED talks and a YouTube channel which has clocked up six million views. His message is simple, if somewhat startling. “Languages cannot be learned,” he says. “They can only be lived.”

Lewis has launched a series of books, Language Hacking, devoted to conversational French, Spanish, German and Italian. “Hacking,” he says, “ is where you use a unique or unexpected shortcut to do something in an unconventional way.”

With sections on survival phrases, slang and sentence-fillers, the books epitomise his high-octane, hands-on approach. But how does his “hacking” method differ from those we’ve all seen – and many of us have tried – before?

“Language learning would be where you study grammar and you study tables of vocab,” Lewis says. “You do an exam, and maybe after a few years you might be able to get by in the language. Language hacking, on the other hand, gets you speaking from day one. You take the handful of words you have, and you squeeze the most you possibly can out of them.”

Lewis’s linguistic journey began in 2003 when, after graduating from UCD with a degree in electronic engineering, he found himself in Spain on an exchange programme – without a word of Spanish. At an international gathering one night, he was gobsmacked when one of his flatmates spoke to someone across the table in one language, then instantly flicked to another language, and a third.

“I thought he was American because he had an American accent, but actually he was from Brazil, ” Lewis recalls. “And I thought, ‘This guy must just be a genius’. Because I got a C in my Leaving Cert German.

“I asked him, ‘What’s your secret – or were you born this way?’ And he said, he constantly practised. It took me a while to internalise that. But when I took it to heart, I realised it really is as straightforward as that.”

Once he had developed his own technique for learning Spanish, Lewis applied it to French, German, Italian, Portuguese, Irish, Dutch, Mandarin, Esperanto and American Sign Language. So, how many hours of practice a day does it take to get from “C in Leaving Cert German” to “the Irish polyglot”?

“Well, what I had to do was change my way of looking at it,” he says. “It isn’t about how many hours a day, really, because that’s a very studious way of thinking of it; ‘I’m learning this thing’.

“Rather than decide OK, after work, from 6pm to 8pm, I’m gonna study Spanish, or French, or whatever, it’s more a case where you change your lifestyle such that you are getting a lot more exposure to the language.

Lewis is a big fan of online learning sites such as italki.com, where students can sign up for one-to-one sessions with teachers in a wide range of languages. He also advocates the use of Skype to talk to native speakers on a regular basis.

“A Spanish friend told me that the hardest language he ever learned was French, and the easiest was Japanese,” he says. “The reason is, he was passionate about Japanese. He wanted to read manga, and he loved anime, and he found Japanese girls to be cute. Of all the languages I’ve learned, I found Spanish to be the hardest. Because I didn’t have a very good learning approach at the time, I put a lot of hours into inefficient techniques. When I started learning Mandarin I got to a conversational stage in just a few months, compared to a whole year in Spanish.”

Having studied for three months in Taiwan, Lewis then spent two months travelling through China. “I got a train for 2,000km, deep into the middle of the country, and I had the most amazing experiences,” he says. A Buddhist monk gave him a tour of his monastery, and he got a Kung Fu lesson in a remote farming village.

“I look like an utter eejit because I can’t do anything – I’ve got the worst co-ordination. But he was very patient, showing me this starter routine and correcting my postures and all that. Then I sat down with him and he explained what he could. I understood maybe 50 per cent of what he was saying. But I had it on camera so I could go through it more deliberately later; play it slower, and understand it better.”

Actually, he didn’t do that badly – a video of the session can be found on his website, fluentinthreemonths.com – but the story explains a lot about Lewis’s method. Most of us, if we only understood 50 per cent, would see our language glass as almost empty. For Lewis, 50 per cent is way more than half full.

“You’ve got to think of it like a fuzzy phone call,” he says. “As if you were talking to someone on a bad line and only every other word was coming through.

“So, for instance, if I called you and you just heard the words ‘dinner … Friday’, you could decide ‘I didn’t understand any of that and it’s impossible to communicate in this situation’. Or you could say ‘OK. Dinner. Friday.’ It’s very likely he was calling me to say ‘Do you want to go for dinner on Friday?’

“You do not have to catch every single word. It’s more a case of trying to catch the few words you understand, and making a reasonable guess based on the context. You might be right. And if you’re wrong, the earth will not open up and swallow you whole.”

Being able to speak the language of the country he visits, Lewis says, has added an extra dimension to his travels. In Italy, he once spent Easter with a friend’s family in Rome. “This huge table of Italians shouting and grabbing food and being very – well, Italian. It was challenging because I had to keep up with a lot of things happening at once, but my Italian meant I felt like I was part of the family.”

In Brazil, on the other hand, he ended up in jail. “After spending three months there, I decided I wanted to stay a bit longer. To extend your visa you have to go to the federal police and request it.” He waited all day, got hungry and grumpy, and gave a bit of cheek to a Brazilian policewoman – who wasn’t impressed by his language skills.

“I started calling her names, so she threw me in a cell to think about what I had said. I wasn’t arrested, but it was a bit scary to be locked away by the federal police – and, ironically, because I was a bit too comfortable with the language.”

As a polyglot, you can never have enough languages. Lewis is on the verge of becoming a “hyperpolyglot”, the tongue-twisting term for a speaker of a dozen or more languages. Which of the 5,000-plus languages in the world will he tackle next?

He laughs. “Someone always comes up to me and says, ‘Ah, Benny, do you speak Swahili?’ Or, ‘Do you speak Urdu?’ You could play that game all night.”

HOW TO LEARN A LANGUAGE QUICKLY

Make mistakes: “As a beginner, I have this goal – to make at least 200 mistakes a day. The more mistakes you make, the faster you will improve and the less they will bother you. The best cure to feeling uncomfortable about making mistakes is to make more mistakes.”

Embrace your inner Tarzan: “Instead of thinking, I have to have the most eloquent Spanish imaginable, I think it’s OK if I say the equivalent of: ‘Me Benny. Me Ireland. Hungry me’. With a new language, it’s not that I magically know 20,000 words. I only know a handful of words – but I’m using them very effectively.”

Talk, talk, talk: “It’s like riding a bike. You can study the aerodynamics of how bikes move through space for years – but you won’t get anywhere until you put your ass on a saddle and start pedalling.”


Language Hacking, by Benny Lewis, is published by John Murray as a book and an audio download

Without visitors, my home became an empty doll’s house
6