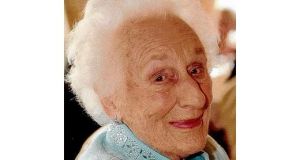 Madoline O’Connell: Born: May 26th, 1915, Died: February 8th, 2013:Artist and doctor, Madoline O’Connell, who has died at the age of 97, was interviewed for a job as a young medical researcher by Sir Alexander Fleming, the discoverer of penicillin. In her late 90s, she was exploring the complexities of information technology, surfing the internet and texting her grandchildren.

Among many fine qualities, she refused to overplay the direct connection with Fleming at his ground-breaking laboratory in London’s Harefield Hospital where she was engaged in pathology research. As she said in a recent interview: “The day I went to meet him, he could hardly talk to me. I never saw him again until the day I went to tell him I was retiring – and again, he could hardly look at me.

“He was a little, shy man, and nobody at the time thought he was anything special. We didn’t have time, you just had to get on with it.”

Following her marriage to Dr St John O’Connell, the couple worked in the UK throughout the second World War, including the Battle of Britain and the “Blitz”. On their return to Ireland in the early 1950s, he became the consultant to St Mary’s orthopaedic hospital in Cork which serves Munster, the first such appointment outside of Dublin. She continued working professionally in pathology until the responsibilities of a young family prevailed.

That she lived a life less ordinary was reflected in the homily of her daughter, Kate, who described a mother who was both “interesting and interested, frugal but generous, sporty and artistic, proud but sociable, formidable and bossy, a texter and silver surfer, a bridge between generations, a speedster and intolerant driver!”

Born into a Cork legal family just 19 days after the Lusitania was torpedoed by a German U-boat off the south coast, up to her passing she was the oldest living graduate of UCC. Uniquely, her link with the university went back to Sir Bertram Windle, her maternal grandfather and first president of Queen’s College Cork, as it was then known. He commissioned the Honan Chapel, which she greatly admired as one of Ireland’s most important repositories of arts and crafts.

A graduate of the class of 1939, she was honoured at last year’s medical and health conferring ceremonies by UCC president Dr Michael Murphy. He observed that “Ireland in the 20th century was not supportive of married women pursuing professional careers. The potential contributions of many fine individuals, such as Madoline, to their professions were, sadly, never fully realized. And for many women, their lives were exclusively shaped by their position in society as defined by their husband’s careers”.

Her’s was a rich past, rooted in Irish nationalist politics, law, art and writing. Her grandfather, solicitor Michael J Horgan, was election agent for Charles Stewart Parnell while her father, John J Horgan, solicitor, prolific writer and pamphleteer, amateur artist and coroner, pronounced the verdict of murder against the Kaiser at the inquest on the 1,198 victims of the Lusitania. The Press Ombudsman, Prof John Horgan, is her nephew.

Her husband’s love of horses resulted in the O’Connells buying a farm near Mallow which they named Scarteen Stud and where they kept a string of racehorses. Living life to the full, they counted many of the country’s leading breeders and trainers among their friends.

Stylish and cultured, with a love of art, books and music, in latter years she became a noted amateur artist in her own right. A widely praised exhibition of her work, entitled Passing the Torch, was held at UCC last November to illustrate the university’s policy of using art to enhance the observational skills of students in medicine.

Predeceased by her son, John, she is survived by her daughter Kate and son Michael.