‘Me and John give so much all year’

John and Edward took some time out from their Irish Times photo shoot to deliver a meaningful seasonal message for Jedheads everywhere. 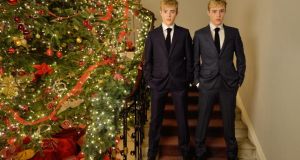 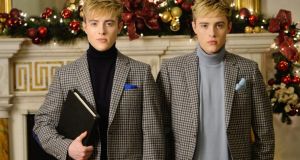 Picture, if you will, Christmas on planet Jedward: presents under the Christmas tree, logs on the open fire, boughs of holly decking the halls, and John and Edward Grimes bouncing off walls. You wouldn’t be far wrong there: if anything can get Ireland’s famous musical twins excited – and a lot of things do – it’s the arrival of Christmas Day and the chance to become like two little boys again, getting high on selection boxes and eagerly opening their presents from Santa. Sounds like total mayhem.

To many who have watched the Jedward phenomenon with bemusement, and not a little puzzlement, the identical twins from Lucan, Co Dublin, may seem like two kids in a state of permanent arrested development. But the two young men who lope into the Merrion Hotel for our cover photoshoot are certainly not little boys anymore. Gone is the squirrel-like skittishness – the boys’ movements seem more measured, less twitchy. They’re not powered so much by nervous energy anymore, but by a more relaxed kind of enthusiasm. At 22 years old, it seems that Jedward – gasp – might actually be growing up.

They still talk fast, though; their sentences leapfrogging over each other while arriving at the full stop in unison. They marvel at the massive Christmas tree in the hotel lobby: “They must have had to cut it in half,” reckons one (I’ll need a few minutes to learn to distinguish between the two).

One is wearing his hair up in the Jedward trademark; the other is wearing his in the boys’ more recent flick-over fringe style – not so vertiginous, but definitely more suited to this new phase in the twins’ career.

With Jedward’s most recent album, Young Love, showing disappointing sales, and recent UK concert dates showing a lot of bum-less seats, it looks as if the novelty may wearing off for the former X Factor and Eurovision contenders.

Their three-album contract with Universal has finished, and Louis Walsh has taken a managerial backseat – their mum, Susanna Gordon, now looks after their day-to-day business.

The boys have written and recorded most of their next album and are shopping for a label to release it. They’ve just returned from a promotional trip to Australia, where they’ve been laying the groundwork for a wider global assault in 2014.

From there, it was straight into rehearsals for their panto at the Olympia; this year it’s Beauty and the Beast. They’re still jet-lagged from their visit Down Under but, ever the troupers, they’re getting on with the work in hand.

They’ll be doing 36 shows over the Christmas period, but they get Christmas Eve and Christmas Day off – and that’s when the boys will get down to the serious business of having a holly jolly Christmas.

“It’s kind of a weird time this year, because our Christmas tree isn’t even up yet,” says John. “’Cause we’re getting this extension to our house and that affected the whole routine this year.”

“We don’t really have a routine,” chips in Edward. “Everything’s spontaneous, we just make everything up. We don’t have a timetable, we just go with it and bring the energy, and if there are any awkward silences, we’re just straight in there to fill it up.”

We’re in Room 181, where Steve from Louis Copeland has laid out a selection of suits for John and Edward to model for our photoshoot. A stylist is on standby to fix the boys’ hair, but she has precious little to do – the boys stand in front of the mirror and get to work with brushes and hairdryers, expertly teasing their hair into the chosen style (today it’ll be the grown-up look), watched by their mum, who keeps an eye out for stray curls or wayward threads. “We always do our own styling, so we’re very self-sufficient,” says John. “Like, we’ve made 10 music videos ourselves.”

The boys head into the bathroom to get changed into their first suit. “Has anyone got a razor?” one calls out. Yes, they do actually shave – and not their legs.

Jedward know how to wear suits – and they carry these Louis Copeland pieces with poise. They look suave, smooth and a lot more mature – like two young web entrepreneurs. People take you more seriously when you wear a suit, don’t they?

“Before we were famous we used to go around and get suits in charity shops,” says John. “And you can get really good suits. I got a Canali suit in a charity shop once and, yeah, they’re really expensive suits, and this was €15, and I looked the bomb, and everybody thought I was someone special, when I was just a normal guy.”

The word “normal” isn’t in common usage on planet Jedward, but at Christmas, the boys like to keep it as close to normal as possible. Christmas is spent in the family home in Lucan and the boys’ active minds are focused on family. “It’s like you have only one day in the year to get it right, otherwise it’s oh, god, Christmas this year was crazy!” says Edward.

“’Cause this is one day when people can see family and relatives,” says John. “It’s like, every Christmas, you’re thankful that your granny or your granddad are still there. I know that Christmas is all about giving, but it’s about celebrating as well.”

“Me and John give so much all year,” says Edward, continuing the alternating comments. “It’s not like a different day for us, of giving, because we always give so much to everybody,.

“Me and John, we don’t put on a show at Christmas . . . oh, we’re gonna try and have fun. We actually have fun. We don’t drink alcohol, we don’t do any of that type of stuff.”

“It’s not like some choice we made, like, oh, I’m trying to give up sweets. It’s just not us. We don’t mind people who do, but I prefer to drink water.”

“OK, our Christmases aren’t always perfect. There are some fights here or there. Everyone’s stressing out, everyone’s really dramatic. Everyone thinks Christmas has to be a certain way, ’cause they see it in Home Alone, but it doesn’t always work out that way, so you’ve got to be ready for that.”

“You just got to be calm and relaxed about everything and just be the bigger person: if there are fights you’ve just got to say, you know what, it’s Christmas Day.”

John and Edward are up early on Christmas Day to see what Santa has brought them. The boys have always had separate couches on which Santa placed their presents, and that’s where he still leaves them.

“We’ll wake up, open all the presents, say hi to everybody, then we’ll get ready, go to Mass, go to dinner,” says Edward.

“Last year, at 6am, we recorded a message for all our fans on Jedward TV,” says John.

They’re expecting between 15 and 20 relations for Christmas dinner, which will be as traditional as the panto. “Turkey, ham, but we’re thinking of having duck this year,” says John.

“Sweet potatoes, vegetables, gravy, cranberry sauce, trifle,” says Edward. “We have Christmas pudding that our granny has made for years. We always eat too much.”

Do you go visiting? “Everyone comes to us, we’re usually in the party house, but sometimes we might go and visit our aunt,” says Edward.

On Christmas night, they’ll watch Titanic or Elf, but there’s still room for conversation. “Me and John have got so much to talk about, because we’ve done so much during the year, so it’s a good time to sit down and tell everyone in detail,” says Edward.

Most people will succumb to the post-dinner lethargy, but John and Edward fight it all the way. “Everyone’s really mellow, it’s just hot,” says John. “You’ve just got to drink lots of water. Or go out for fresh air.

“You just keep restarting yourself, forget about everything you’ve done, and just keep going.”

That could well be Jedward’s mantra for 2014.

Jedward star with Linda Martin in the Dublin Bus panto Beauty and The Beast at The Olympia Theatre, Dublin until January 5th

r Jedward were styled by Steven Dunne of Louis Copeland. Hair assisted by Danielle Dignam from Dylan Bradshaw Hair Salon, 56 South William Street, Dublin 2. With thanks to The Merrion Hotel.