Max von Sydow obituary: star of The Seventh Seal and The Exorcist 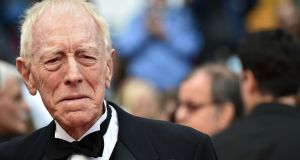 Max Von Sydow remained among a select group of actors to have formed symbiotic relationships with directors, in which one helps the other achieve a high level of artistry. Photograph: Alberto Pizzoli/AFP via Getty Images

Max von Sydow, the tall, blond Swedish actor who cut a striking figure in American movies but was most identified with the signature work of a fellow Swede, director Ingmar Bergman, died on Sunday. He was 90.

His wife, Catherine von Sydow, confirmed the death in an emailed statement. No cause was given. Swedish newspaper Aftonbladet said he died in Provence, in France.

Widely hailed as one of the finest actors of his generation, von Sydow became an elder pop culture star in his later years, appearing in a Star Wars movie in 2015 as well as in the sixth season of the HBO fantasy-adventure series Game of Thrones. He even lent his deep, rich voice to The Simpsons.

By then he had become a familiarly austere presence in popular movies such as William Friedkin’s The Exorcist, Steven Spielberg’s Minority Report, Woody Allen’s Hannah and Her Sisters and, more recently, Julian Schnabel’s The Diving Bell and the Butterfly.

But to film lovers the world over he was most enduringly associated with Bergman. If ever an actor was born to inhabit the World According to Bergman, it was von Sydow. Angular and lanky at six feet three inches, possessing a gaunt face and hooded, icy blue eyes, he not only radiated power but also registered a deep sense of Nordic angst, helping to give flesh to Bergman’s often bleak but hopeful and sometimes comic vision of the human condition in classics such as The Seventh Seal and The Virgin Spring.

But it was not until his later years that he could range widely in American movies. In Hannah and Her Sisters (1986) he was the possessive lover of the youngest sister, played by Barbara Hershey. In the science-fiction thriller Minority Report (2002) he was Tom Cruise’s coolly efficient boss, director of a police force that benefits from telepathic powers to stop crimes before they are committed.

Von Sydow earned his first Academy Award nomination in 1988 – some 40 years after his movie debut – for his work in Pelle the Conqueror. A Danish film directed by Bille August, it told the story of Lasse (von Sydow), a down-at-heel widowed Swedish labourer who brings his young son, Pelle, to Denmark at the turn of the century in search of a better life, only to encounter still more hard times.

There were other late-career high points, including Hamsun (1997), in which von Sydow submerged himself in the tangled personality of Nobel Prize-winning Norwegian novelist Knut Hamsun, whose age and ego led him to become a tool of the Nazis during the second World War.

By his late 80s, cast in the brief role of village elder Lor San Tekka in Star Wars: the Force Awakens and as the enigmatic seer Three Eyed Raven in season six of Game of Thrones, he was having, as critic Terrence Rafferty wrote in the Atlantic in 2015, “the sort of late career that eminent movie actors tend to have, popping up for a scene or two in commercial stuff that needs a touch of gravity, and receiving, as famous old actors do, the honour of ‘last billing’”.

He was also treated to a fresh round of recognition. “For a significant portion of his six decades on screen,” Rafferty wrote, “he has been the greatest actor alive.”

Von Sydow received his second Oscar nomination, as supporting actor, in 2011 for his performance in the otherwise critically savaged Extremely Loud & Incredibly Close, in which he played the mute companion of a boy whose father had died in the 9/11 attack on the World Trade Center. (In a wry handwritten note to the Academy expressing his gratitude, he wrote: “I don’t know what to say.”)

Carl Adolf von Sydow was born on April 10th, 1929, in Lund, in southern Sweden. His father was a university professor, his mother a schoolteacher. He attended the Cathedral School in Lund, where he learned English at an early age and began his acting career in an amateur theatre group he founded with friends.

He was said to have adopted the name Max from the star performer in a flea circus he saw while serving in the Swedish Quartermaster Corps.

After his military service, he studied at the Royal Dramatic Theatre in Stockholm, from 1948 to 1951, and made his screen debut in Only a Mother (1949), Alf Sjoberg’s drama about a woman raising a brood of children while toiling in virtual serfdom in a class-riven Sweden.

In 1951, while still in Stockholm, von Sydow married Kerstin Olin, an actress, with whom he had two sons, Clas and Henrik. The marriage ended in divorce after 45 years.

Along with his sons and Catherine von Sydow, he is survived by her sons, Cedric and Yvan, whom he adopted, according to the Expressen newspaper.

Von Sydow began his long association with Bergman in 1955, when von Sydow moved to the city of Malmo, in southern Sweden, and joined the Malmo Municipal Theatre, with which Bergman was associated.

Over the next few years von Sydow appeared in many Bergman films, becoming an important member of what was essentially the director’s repertory company, whether in lesser roles (in Wild Strawberries and Brink of Life) or lead ones (in The Magician, Through a Glass Darkly and The Virgin Spring).

By the early 1960s von Sydow was getting offers from Hollywood and turning them down, saying he was happy enough with his work in Sweden. Then he was offered the role of Jesus in The Greatest Story Ever Told, and he went to Hollywood, embarking on an international career.

For all his connection to the land of his birth and of Bergman, Sweden became distant to von Sydow. In the 1980s, though he had a summer house on an island in the Baltic Sea, he lived in Rome. His sons attended American universities.

“I have nowhere really to call home,” he told the New York Times. “I feel I have lost my Swedish roots. It’s funny because I’ve been working in so many places that now I feel at home in many locations. But Sweden is the only place I feel less and less at home.”

Von Sydow remained among a select group of actors to have formed symbiotic relationships with directors, in which one helps the other achieve a high level of artistry. He found kindred spirits in two filmmakers. One was Troell, who directed him in seven films and wanted him to take the lead in The Last Sentence, his acclaimed 2012 film. He declined, Troell said, because at 85 von Sydow felt “he was too old”. (The role went to Jesper Christensen, 19 years his junior.)

The other, of course, was Bergman. Von Sydow recalled his last conversation with the director, who died in Sweden in 2007 at 89: “He said: ‘Max, you have been the first and the best Stradivarius that I have ever had in my hands.’” – New York Times