Marian Keyes: I can’t summon the emotional energy needed for a decent goodbye

To coincide with Friendship Week, the Women’s Podcast explores the joys and challenges of these important platonic bonds 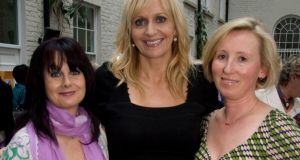 Friendship week: From best mates to bromances - All week on the irishtimes.com/life-and-style, we take a closer look at friendship

“My life would be so much easier if I never had to say goodbye to friends … giving good goodbye is a real art,” said Marian Keyes in the Friendship Week episode of The Women’s Podcast.

She was talking about the “Irish goodbye”, the most discreet way to get away from a group of friends at the end of a night: not saying goodbye at all.

“I can’t tell you the number of hours I’ve wasted sitting at a table, afraid to get up, my face aching from the lactic acid generated by holding a fake smile simply because I can’t summon the vast amounts of emotional energy that a decent departure requires. I eye the door and yearn to be on the far side of it,” she said.

Keyes was reading an extract from her new collection of essays Making It Up As I Go Along, published by Penguin. All Irish royalties will go towards the Save the Children/Syria Fund.

Also in the episode, guest presenter and Irish Times journalist Sorcha Pollak spoke to three women who have been singing together in a choir every Monday night since 1969. Pauline Daly, Kay Buckley and Rita Ellis talked about the impact such strong ties have had on their lives.

The key to lasting friendship is taking care of each other in times of need and making a fuss over birthdays, according to the women.

Later, Zeenie Summers, who has featured in The Irish Times New to the Parish series, talked about the challenges of making friends in a new country and a new culture.

“My first seven months in Ireland were spent indoors, watching Jeremy Kyle and Hollyoaks. I met no one. I didn’t even know my neighbours,” said Summers, who is originally from Nigeria.

Irish Times journalists Ciara Kenny and Dominique McMullan explored how technology keeps friends together, even if they are scattered across the globe. They use Whatsapp, the messaging app that has one-billion monthly active users, to keep in touch with friends that are continents apart.

Next week we will be talking about the general election, and we want to know what issues are important to you.

Our question of the week is: If a politician knocks on your door during the election campaign, what will you ask them?