Man before the Storm: Ronan Keating’s Australian girlfriend Storm Uechtritz on her move to Ireland 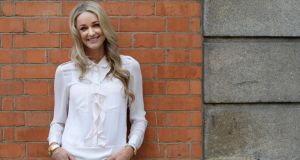 Storm Uechtritz in Dublin. “Sometimes in life it really helps to take a step back and try to understand that there are always two sides to a story.” Photograph: Dara Mac Dónaill/The Irish TimesTimes 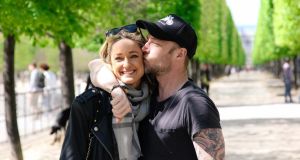 RTÉ researchers shouldn’t wait too long to book Australian TV producer Storm Uechtritz, for the popular genealogical TV show Who Do You Think You Are? Uechtritz, who got engaged recently in Paris to Boyzone’s Ronan Keating, was brought up partly in Papua New Guinea and has a remarkable family history: her great-grandmother Phebe was a princess in Samoa who, as a teenager in the mid- 1800s, met and married her great grandfather, the renowned British anthropologist and botanist Richard Parkinson, himself the descendant of a Danish duke.

According to a recent British newspaper report, this royal pedigree makes her a seventh cousin to Prince William.

“I haven’t done the research so I don’t know about that part,” Uechtritz (33) laughs, tossing off her sandals and curling her legs underneath her on the chair in the presidential suite of the Westbury Hotel in Dublin. “But it’s true my great-grandmother was a princess and a linguist, she helped Parkinson with his research into local tribes by translating for him. They married and then they moved to Papua New Guinea when he was working studying tribes there. They became like the mama and papa of the village.”

Uechtritz and Keating are usually based in London and this is just a flying visit. Keating is his usual affable self – he says ‘God bless’, at least twice and it’s endearing.

Uechtritz says “grand” a lot, an Irishism she has clearly caught off him. There’s a definite touch of Posh and Becks about this pair: their Twitter accounts are joined at the hip; there are brand endorsements from airlines to motorbikes; there’s a serious amount of red carpet action and plenty of selfies on skiing holidays. While some might baulk at a relationship spread so liberally across social media platforms, in real life their evident happiness at having found each other is impossible to miss never mind begrudge.

With Keating gone to lunch, the possible seventh cousin of Prince William returns to her childhood in the remote village of Wau in Papua New Guinea, or PNG. She lived there until she was eight when her father, who managed a goldmine – her life is peppered with these intriguing details – moved the family to “a cattle and tropical fruit property” in northern Queensland.

“It was an incredible childhood, kind of wild,” she says. “In PNG I have memories of going fishing with villagers with spears, out all day, coming home at nightfall. In Australia I grew up playing cricket and rugby with my brothers. I was a nerd at school, I wanted to achieve academically and in every way really. I sang, I acted, I modelled. I was just one of those kids, I didn’t want to put limits on myself. Maybe it was coming from a place like PNG to Australia, but I wanted to grasp it all.”

Her nerdiness won her educational scholarships, first at second level to a top school in Cairns – she got up at 5am each day to catch her bus to school which was hours away – and later to US university UCLA. She spent her final year studying film and TV in LA, interning with HBO in the era of Sex and the City, The Sopranos and Entourage. Back home in Australia she moved to Sydney, starting as a receptionist and quickly moving up the TV ladder.

She has a lot to say about the challenge of overcoming the “pretty blonde stereotype”, pointing out that in an industry dominated by men at the top, she had to work harder to succeed than her male counterparts, who would arrive “still drunk from the night before, notes all over the place. I knew I could never get away with that, I had to prove myself, so that’s what I did.”

She first met Keating in 2010, while she was a producer on Australian X Factor and he was a judge. They got engaged recently in Paris, 2½ years after they became romantically involved. She says she hates not wearing the (extremely diverting) diamond and titanium ring which Keating helped design (“titanium is supposed to last forever”, she says). Having decided to make Dublin their permanent home, they are now on the hunt for a base somewhere near enough to take part in the school run – Keating’s three children live in Malahide – but, she says, “we also want something with acreage. I grew up on a farm and I want a bit of peace and tranquillity when I go home and close the door. Our life is so busy. It’s important to stay balanced.”

Neither of their lives was particularly balanced when they first met. At the time, Keating was dealing with the break-up of his marriage, the intimate, painful details of which the whole country got to read about in the papers. They were just friends at first. “I’d never met a celebrity like him before, he treated people with such kindness and respect, he knew everyone’s name,” she says, still impressed at the memory.

Uechtritz was having her own romantic troubles, emerging from a failed marriage with her long-term partner. “In some ways, Ronan helped me and I helped him, we were going through the same thing, so we could relate.”

Keating has said in the past that he thought his affair with a dancer on his Boyzone reunion tour, while he was still married, might have put Uechtritz off getting involved with him. When I mention this, rather than avoiding the subject, she brings up the break-up of her own parents’ marriage which, she says, gave her a more pragmatic view of relationships.

“The thing is, you don’t have an affair unless the marriage is already broken. I’ve been through that, I understand it. The story from Ro is very different to the story everyone else knows and I respect him a lot because there is so much he could say, which he doesn’t. He’s copped it on the chin and he walks with his head held high and he tries to keep the peace, and he does that every single day.”

She says he has suffered because of his actions and that he will never forgive himself for the hurt he caused. “He went about things the wrong way, but people don’t realise how hurtful it is every time there is an article it has to be mentioned again. It could be a really fabulous story about Ro doing something great and it will be there; people write about our engagement and then it’s there again. We’ve moved on and we just want everyone else to move on. It’s also important for the children. They don’t need to be reading about it. It’s something that happens to millions of families around the world, so, you know, get over it.

“I forgave my parents. I moved on. Sometimes in life it really helps to take a step back and try to understand that there are always two sides to a story.”

All of this comes out in a heartfelt rush, and she worries afterwards that she has said too much. “I just think he gets a hard time and he doesn’t deserve it.”

An engaging, energetic sort, she is never more animated than when she is talking about Keating and her love for him. “I just understand him and know how much he does for everyone around him – it’s borderline sickening actually – to make sure everyone is happy. My family are no-bullshit, good salt-of-the-earth people who don’t suffer fools and they were all a bit protective of me at first, but then they got to know him and saw that he’s the best man. They have never seen someone so attentive, he is incredible, sometimes I have to tell him to stop, I say ‘the kids are grand, I’m grand, we are all grand, just stop, settle down, take the pressure off yourself a little’.”

Uechtritz, who up until recently was a producer/director of big ticket TV programmes from The X Factor to MasterChef Australia, is now in something of a transition period. As well as the hunt for a house, she is also on the trail of an alternative career. A production stint on The Voice UK recently helped her see that staying in one place for long periods for a gig isn’t feasible when Keating travels so much for work. (He starred in the musical Once in the West End last year and is heading off to write songs for a new album in New York).

“I’ve no interest in being a kept woman,” she says – it’s interesting that she chooses that oddly old-fashioned turn of phrase – “but I need to do something that will fit in with mine and Ro’s life.”

Part of her bid to not be A Kept Woman is the movie treatment she has written for a film set in Paris during the second World War. There’s interest from an American producer, she says, then there is a business idea which she can’t talk about at the moment. “I’ve always worked and been independent and I want to develop something of my own that means Ro can have a break and not always worry about working and looking after everyone else.”

Just then there’s a knock on the door and Keating arrives back from lunch. They have to start packing. What Uechtritz really wants, she says, is to be settled in a home in Dublin with her new business launched by the end of the year. “It’s a new phase of our lives,” she says, smiling as she walks me to the door. When it closes, I hear laughter from the other side and I think of something the great-granddaughter of a Samoan princess told me earlier: “I do honestly feel like my life began when Ro and I got together.”