His huge influence extended to role as broadcaster and educator 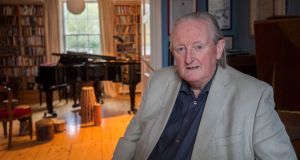 Mícheál Ó Súilleabháin, who has died after a long illness at the age of 67, was a musician who showed exceptional gifts as a leader and communicator in a career that encompassed performing, composing, broadcasting, recording (both as performer and producer), ethnomusicology and education.

His success in all of these undertakings was aided by an unusual gift for seeing the positive in the people he encountered and the situations in which he found himself.

When writing about the composer Aloys Fleischmann, under whom he studied at University College Cork, he quoted Václav Havel’s distinction between “optimism as the conviction that something will turn out well, and hope as the certainty that something makes sense regardless of how it turns out”.

He saw Fleischmann as someone who had moved from optimism to hope. But his own life and achievements showed how constructively both can co-exist.

He was born in Clonmel, Co Tipperary, and from 1969 to 1973 studied music at UCC, where he also came under the direct influence of Seán Ó Riada. Like Ó Riada, his interests straddled the worlds of classical music and Irish traditional music.

Unlike Ó Riada, he never essayed large-scale work in a purely classical style. But his career path followed that of Ó Riada, as the pull towards the traditional proved much stronger than the magnetism of any other style or form.

The strength of his feeling for traditional music can be gauged from his 1999 description of it as “a sonic encoding of the dynamic of Irish identity itself . . . a swirling gyroscope of Irish cultural life in its general sweep”.

The first notice of his work in music in this newspaper came in 1972, when Geraldine Neeson praised his conducting of the College Choral Society, writing that he “obtained a lively response” from the young singers. In 1975, he became a music lecturer at UCC and, in that same year, his first LP, titled simply Mícheál Ó Súilleabháin, was released by Gael Linn.

He completed his PhD on innovation and tradition in the music of Tommy Potts under ethnomusicologist John Blacking at Queen’s University, Belfast, in 1987.

That same year he was one of the first artists to be signed to Richard Branson’s Virgin Venture label. A string of collaborations with the Irish Chamber Orchestra followed, including Oileán/Island, Casadh/ Turning, and Templum.

Lumen, his work for the interval of the 1995 Eurovision Song Contest featured, among others, Brian Kennedy, the Monks of Glenstal Abbey and the RTÉ Concert Orchestra, was issued as a single by Virgin.

In 1994 he departed UCC for the University of Limerick, where he was appointed the university’s first professor of music and founded the Irish World Music Centre, which was later re-named the Irish World Academy of Music and Dance.

His 1995 seven-part television series for RTÉ and the BBC, A River of Sound: The Changing Course of Irish Traditional Music, sparked an intense debate about what could and could not be regarded as traditional.

That debate was intensified at the 1996 conference Crosbhealach an Cheoil (The Crossroads Conference), attended by over 300 delegates, at which he was the keynote speaker.

His views were pitted against those of the concertina player Tony McMahon who played tracks from the River of Sound album and described one piece as “hiberno-jazz, scrubbed clean of roots and balls”, and another as a “rattling of bones”. Robust dialogue and argument was something he had no difficulty in handling.

His most enduring musical monument remains the Irish World Academy of Music and Dance, which opened up the world of academic study, and the qualifications that go with it, to a host of musical and dance interests not otherwise covered in Ireland.

He was generous with his time and expertise and served on many boards and committees. He was a founder and board member of Maoin Cheoil an Chláir School of Music in Ennis, chair of the Irish Traditional Music Archive, the first chairman of Culture Ireland, and a board member of the Contemporary Music Centre, the Irish Chamber Orchestra and Daghdha Dance Company.

He is survived by his wife Helen and stepson Luke, his sons Eoin and Moley (Mícheál) from his first marriage to Nóirín Ní Riain, and his brother John O’Sullivan.