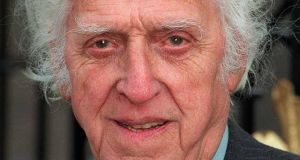 Sam McAughtry, who has died aged 91, was a writer and broadcaster having previously been a career civil servant.

From a loyalist background in north Belfast, he served for 18 months as a member of Seanad Éireann (elected 1996 by the Industrial and Commercial Panel). A “hybrid unionist”, he declared himself happy to live in the United Kingdom and happier still to be Irish and to proclaim his Irishness. His happiness would have been complete had the British Labour Party organised in Northern Ireland.

He began writing in his teens and eventually found an outlet for his work in Ireland’s Saturday Night , a sports publication and sister paper to the Belfast Telegraph , and known in Belfast as the Ulster .

His first article to appear in print was based on his experiences of dog racing at Dunmore Park. During a long association with the Ulster , dozens of his articles were published.

His first book was inspired by the death of his older brother Mart, who perished when the Kenbane Head was sunk by the Admiral Scheer in the Atlantic on November 5th, 1940. Sam McAughtry idolised his older brother and never fully recovered from his death which he chronicled in The Sinking of the Kenbane Head (1977). The book was well received and the chapters set in Tiger’s Bay were singled out for particular praise.

Douglas Gageby to write a column for The Irish Times and was later an Irish Field columnist. He was a popular broadcaster, contributing to RTÉ’s Sunday Miscellany on more than 200 occasions.

He was born in 1921 in the Tiger’s Bay area of Belfast, one of the 10 children of Mark and Elizabeth McAughtry. Three brothers and a sister died in early childhood. His father was a merchant seaman and money was scarce. “My mother knew all about the hard times in the Hungry Twenties, all right. It’s no wonder she was wild religious.”

He attended St Barnabas School in Duncairn Gardens, which he remembered as an old-style church school that prepared its pupils for a life of manual labour. He was enrolled in the Church Lads’ Brigade and sang in the local church choir.

At 13 he was sent to the Belfast College of Technology where, his mother hoped, he would learn a trade. However, while he did well at English and French he did not shine in other subjects, and after a year he left. He fared no better as an errand boy, a job he lost.

His family’s strong loyalism failed to open any doors for him and he hung around the shipyards in the hope of finding work. But his hopes were frustrated by a “mafia” that barred many Protestants as well as Catholics from getting jobs. Eventually, he found work as a riveter in Shorts aircraft factory.

During the second World War he served with the Royal Air Force.

Determined to avenge his brother’s death, he qualified as a navigator and flew with a Beaufighter squadron based in North Africa, carrying out attacks on shipping and harbour installations in the Aegean islands. He returned to civilian life in 1946, living on the dole in Tiger’s Bay. He recalled “hitting the bottle pretty hard” with his RAF severance pay, although “unemployment didn’t eat my soul”.

A job as a counter clerk at the unemployment exchange in Corporation Street did not last long. He was angry that unemployed people had to queue for hours to obtain their payments. “It was bad enough having to be on the dole, without being insulted on top of it all.”

He moved to England where he worked as a hod-carrier and as a car-body worker in Ford’s in Dagenham. As a building worker in London, he lived in a hostel with hundreds of other Irish labourers. On Friday nights, Cockney buskers played Irish melodies outside the hostel and were well-rewarded by the “sentimental Irish”.

The musical entertainment was followed by toss ha’pence. When the coins were tossed in the air, there could be £100 on the ground in side bets, and a “toner” was employed to “whale the punters back with a strap”.


Committed trade unionist
Many a labourer’s weekend was ruined because of bets that went astray.

Sam McAughtry returned to Belfast where in 1947 he entered the civil service to work in the Department of Agriculture. An active member of the Civil Service Association (now the Northern Ireland Public Service Alliance), he fought hard to have the union affiliate to the Irish Congress of Trade Unions which he regarded as “one of the greatest forces for good in Ireland”. As a Protestant he played an important role in persuading his fellow religionists to join an all-Ireland body.

He was chairman of the Peace Train organisation, set up in 1989 in response to IRA bomb attacks on the Belfast-Dublin rail line and disbanded in 1995 in what he called “an act of faith”. A onetime member of the Northern Ireland Labour Party, he described himself in 1983 as “the voice of leftish Ulster Protestantism inclined towards trade unionism, the Workers’ Party and a bit of a gamble but not above staying in Bloom’s Hotel”.

He was honoured in 2001 by the Irish Writers’ Union for his contribution to Irish literature.

A betting man himself – he won £100 playing poker on a wartime voyage to America – he enjoyed the company of gamblers.

“Punters are great people. They’re terribly philosophical. I suppose they’d have to be or they’d go mad.”

He is survived by his wife Phyllis; and daughters Marion, Elaine and Angela.

Cocoon yourself in colour in cosy D4 terrace for €765k
9