Living with anxiety: ‘I went from carefree to not being able to leave the house’ 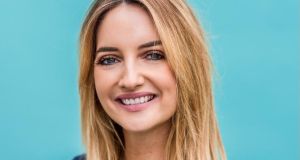 Caroline Foran: ‘The more I tried to be fine, the more that fire built up inside me’

“I had gone from being this carefree, successful girlfriend, who was like, ‘I’m in London today interviewing Hugh Jackman! ’ to, ‘I can’t leave the house and I need you to literally hold me up every day’,” says Caroline Foran, describing the crippling anxiety that she has now learned to live with.

“There was nothing dramatic that happened, nothing life or death that happened, it was just too much change too quickly,” she told Róisín Ingle, in the latest episode of the Róisín Meets podcast.

As a child, Foran was constantly coming home from school complaining of an upset tummy. She now recognises that this was a symptom of anxiety.

By her 20s, she was confident and carefree, happily working in what she describes as her dream job, progressing from intern to editor and interviewing Hollywood celebrities for the website entertainment.ie.

Not long after moving in with her boyfriend, she started a new job as the editor of start-up company Lovin Dublin, as she sought to move forward in her career.

That turned out to be a mistake and after just two weeks in her new role, those symptoms of anxiety that she had suffered as a child and in her teens began to surface once again.

“It was nothing to do with the place, or the job, it just wasn’t the right switch for me. So very instantly, within a few days of starting that job, it went straight back to my stomach and it was like: oh no, something’s not right,” she said.

She tried to style it out, refusing to connect the dots between her stomach problems and the stress of the new job, and beat herself up for being a sensitive ‘snowflake’, but “the more I tried to be fine, the more that fire built up inside me.”

Eventually she bit the bullet and told her boss that she needed to leave, go back to her parent’s house and get better. He was “very understanding, very kind” and inspired in part by Bressie’s journey, set about normalising her anxiety, accepting it and then owning it.

The result is her book, Owning It: Your Bullshit Free Guide to Living With Anxiety which explores exactly what anxiety is, its triggers and the various treatments - from Cognitive Behavioural Therapy, acupuncture, diet and the often debated role of medication.

She hopes the book will help others like her to see that they are not alone.

“It’s about being able to read something by somebody who’s like: I know exactly how crap you’re feeling and I’m going to try to help you through it and you can relate to me, because I’m just a normal person.”

Owning It: Your Bullshit Free Guide to Living With Anxiety by Caroline Foran, published by Hachette, is out now.

We want to build a separate granny flat. Where do we start?
4